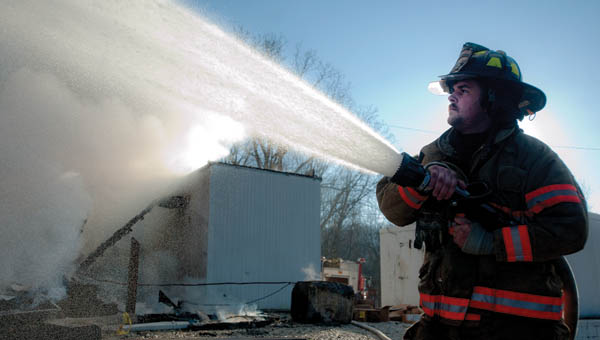 Chesapeake Union firefighter Edgar Moske is semi-silhouetted as he helps to battle an early morning fire at Sky Lake in Windsor Township on Wednesday.

CHESAPEAKE — A second fire in less than a week at Sky Lake is being viewed as suspicious by the Chesapeake fire chief.

“This was absolutely a set fire,” fire chief Ed Webb said. “Who set it and for what reason we don’t know.”

On Saturday a fire gutted the main building at the pay lake outside of Chesapeake. That fire was deemed by the state fire marshal to be accidental, probably caused by a heater used to thaw pipes.

On the second fire the Chesapeake squad got the call around 5:30 a.m. Wednesday arriving at the scene to find the structure fully involved, Webb said.

“There were no utilities,” he said. “Nothing was on. It all had been pulled from the last fire. When we arrived on the scene, it was too gone to send any firemen in to fight the fire. The decision was to contain the fire and not risk any firemen going inside.”

The early morning blaze brought Chesapeake, Rome and Proctorville volunteer fire departments to the scene with Crown City and both Burlington-Fayette units on standby.

By 11:30 a.m. Webb sent all but Chesapeake back to their stations because of the cold. 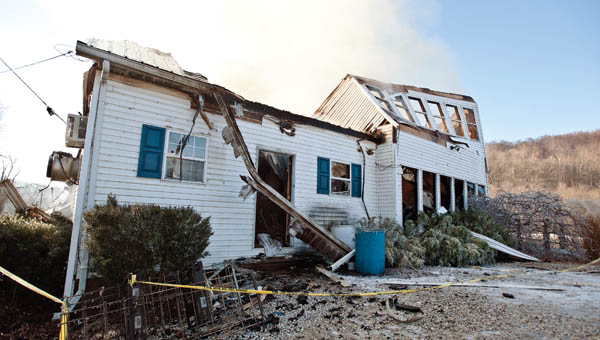 “Some pumps are freezing up,” he said. “They’re covering our area while we stay with eight firemen on the scene.”

Because of the morning blaze part of the back of the structure collapsed and fell into the lake while Sky Lake owner Tracy Ellis was getting an endloader to push the structure away from County Road 32.

“It won’t block the road if it does fall,” Webb said.

While the fire marshal investigated the first fire, Webb is uncertain if he will call investigators in for the second incident.

“I called (the marshal) and he wants to know what was left,” he said. “By the time we finish there will be very little left. He wants me to make a determination whether he can make a good investigation. I don’t see any way to make a good investigation. There is nothing probably salvageable from the first fire. I will contact him to let him determine what little bit is left.”

Search on in burglary case

Lawrence County Sheriff’s deputies continue their search for a man wanted for a felony burglary. The incident happened on Jan.... read more