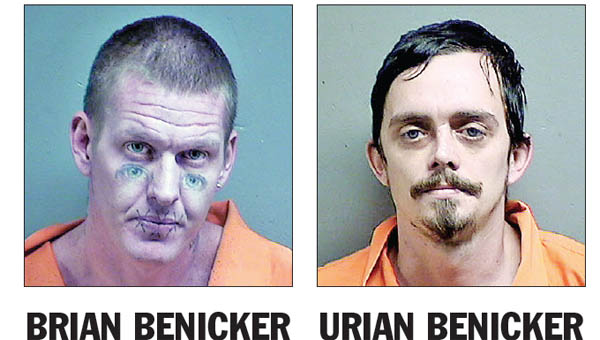 Detective Joe Ross said the arrests were made Wednesday at about 4 and 4:30 p.m.

Arrested were Brian Benicker, 34, of the 1900 block of South Second Street, and Urian Benicker, 30, of the 700 block of Vernon Street. Brian was arrested at his home and charged with a third- and fourth degree count of trafficking in Alpha-PVP, while Urian was arrested at the Family Dollar in Ironton and charged with one third- and two fourth-degree counts of trafficking in Alpha-PVP.

“We started the investigation back in the fall, around September,” Ross said. “We had been having a lot of complaints from citizens about the sale of Alpha-PVP.”

Ross said the drug task force had a series of controlled drug buys from the brothers, which led to the two being indicted by a Lawrence County grand jury this week. Those indictments were two of six secret indictments to be filed this week.

Alpha-PVP, sometimes called gravel, is a kind of bath salt with methamphetamine-like effects. While many people may not have heard about Alpha-PVP, Ross said it is a growing concern.

“It’s been a big problem here in the city and in the county,” Ross said.

In December, an Ironton man, Jason Newcomb, 32, pleaded guilty and was sentenced to seven years in prison for trafficking 46 grams of the drug.