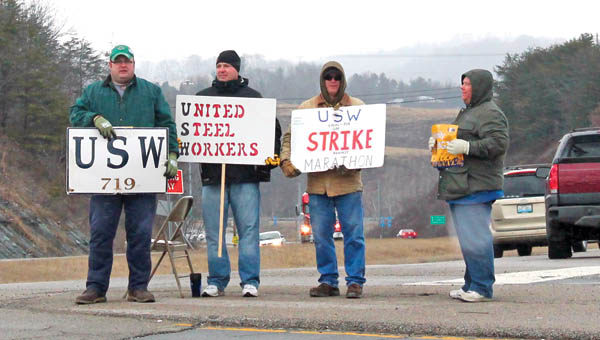 Members of the United Steelworkers Union on strike protesting at the Catlettsburg refinery.

CATLETTSBURG — The mood on the first day of a nationwide strike affecting more than 400 workers at Marathon Petroleum’s Catlettsburg refinery was optimistic, according to the local union representative.

“Everything is real good,” Dave Martin, vice president of the refinery’s United Steelworkers local, said on Monday morning. “Nobody wants to be on strike. But you do what you have to do.”

There are 429 workers affected by the work stoppage at Catlettsburg that, along with Galveston Bay in Texas City, Texas, are the two Marathon refineries that were pulled out by the national USW.

“We have national bargaining and a pattern is set and accepted as part of the negotiations,” Martin said. “Here nobody can agree to the terms on the contract. They gave everybody whose date was up on Feb. 1 either a rolling 24-hour contract extension or pulled out on strike.”

Those working under the rolling contract extension can give 24-hours notice, then go out on strike.

“Marathon Petroleum Company’s Catlettsburg, Ky., and Galveston Bay, Texas, refineries are among those chosen by the USW for work stoppages. MPC has plans in place to ensure the continued safe operation of its facilities and stands ready to continue negotiations at the local level,” a company spokesperson said via email.

The USW represents 65 refineries in the country with more than 230 refineries, oil terminals, pipelines and petrochemical facilities.

According to USW International President Leo W. Gerard, the national organization was at the table with Shell US, when it refused to provide a counter-offer to the union, halting negotiations.

As far as those, the Catlettsburg site has been affected by staff reductions and overtime, Martin said.

“Definitely, it is the staffing,” Martin said. “We don’t have sufficient staff at Catlettsburg and we work a lot of overtime. Definitely our numbers have been cut over the past 15 years by several hundred.”

Martin estimates to get staffing at a level he would call safe would take an increase of about 30 percent of the workforce. If those levels were met, that would mean between 150 and 200 jobs in the Tri-State, he said.

As far as how long the strike will continue, Martin doesn’t have a prediction at this time.

“I have no gut feeling,” he said. “I know it has been a very heated situation at the national table.”

In about two weeks workers will be getting their first paycheck from the USW strike fund.

“Everybody gets the same,” Martin said.

The last nationwide work stoppage at Catlettsburg was in 1980 and last local strike was in 1996.

Right now company personnel is running the refinery. “Marathon Petroleum Company’s Catlettsburg, Ky., and Galveston Bay, Texas, refineries are among those chosen by the USW for work stoppages. MPC has plans in place to ensure the continued safe operation of its facilities and stands ready to continue negotiations at the local level.”

A man arrested out of state and wanted in the murder of a South Point man is expected to be... read more