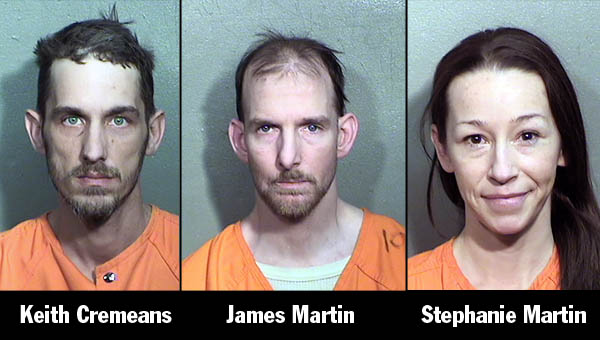 James E. Martin II, 39, Stephanie L. Martin, 42, and Keith P. Cremeans, 37, were stopped in a vehicle and all three has warrants out for their arrest.

James E. Martin II, 39, Stephanie L. Martin, 42, and Keith P. Cremeans, 37, were stopped in a vehicle and all three had warrants out for their arrest.

Following the traffic stop, officers issued a search warrant at the Martin’s residence at 20 Township Road 1039 Apt. 9, Chesapeake. According to a release from the Lawrence County Prosecuting Attorney’s Office, heroin, marijuana, scales, cash and a loaded firearm were seized at the residence.

According to the release, the investigation began after the task force received complaints of drug activity from members of the community. The investigation is ongoing and more arrests are expected.

The three suspects are being housed in the county jail and are expected to be arraigned on Friday in Lawrence County Municipal Court.

For a Statehouse giant: New bridge to be named for Lawrence legislator

Honoring one of Ohio’s longest-serving legislators was the impetus for naming the new Ironton-Russell Bridge for the late Sen. Oakley... read more