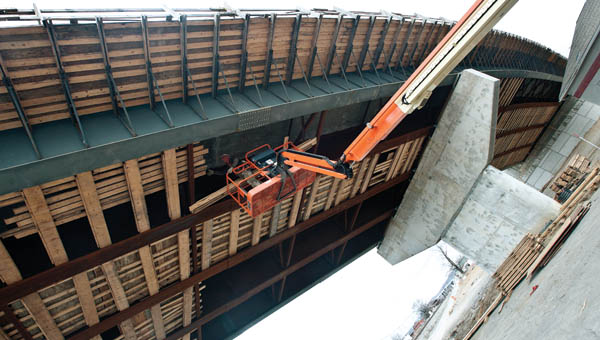 Employees from Brayman Construction Corp. remove planks from underneath finished bridge construction on Tuesday in Ironton.

Maybe this time next year the two sections of the ever-growing Ironton-Russell Bridge will be one.

After the two towers are completed Brayman Construction crews will start on the roadway bed of the bridge that will link Kentucky to Ohio. By the end of 2015, the sections should be ready to become a span of 1,640 feet.

“That will probably be very late this year,” said Kathleen Fuller, public information officer for District 9 of the Ohio Department of Transportation.

Each tower is 18 segments grounded on an individual pier and is 300 feet high. Projected cost for the cable-stay bridge is $81.3 million with an estimated completion date of fall of 2016.

“We have not accomplished as much in the cold, rainy, snowy weather,” Fuller said. “We are behind schedule but things are going well. You know going into a major project you anticipate you will stay on schedule. But you don’t if it’s multi-years. It could be weather or design-related. At the end we will have a good bridge. It will be a nice structure. Until then, we will keep traffic maintained on the old bridge.”

The fight lasted 26 months and whether the participants actually kissed and made up is known only to them. But... read more