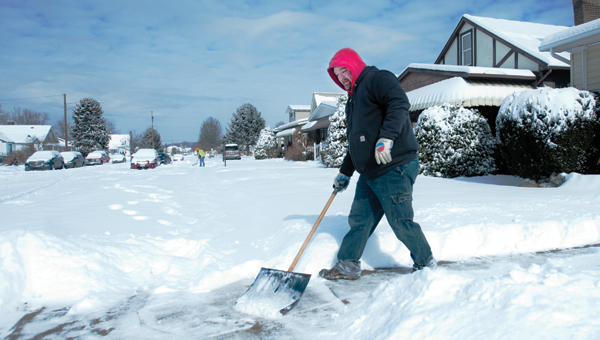 Almost 30 hours of continuous snow has had road crews out fighting cold temperatures and enduring long hours as they struggle to clear roads.

With 376 miles of county roads to clear county engineer crews need between eight to 10 hours to clear roads. As the snow keep coming, often that work is covered over as soon as the plows hit.

Add to that a frigid Fahrenheit and the battle to get roads down to pavement remains an uphill battle.

“With these temperatures, we have to plow roads before we put on salt,” Lawrence County Engineer Doug Cade said. “Salt lowers the melting point of snow. Once we get to 32 degrees a pound of salt will melt 40 pounds of snow. At 20 degrees it is only eight pounds.”

By 7:30 a.m. Monday, the call went out for county crews to come into the garage to start getting trucks and plows out on the roadways. That meant a 12-hour shift for those workers.

“By 8 p.m. we called them in so they could get a good night’s rest,” Cade said. “We don’t have the capacity to man 24-hours a day. If we were to run 24 hours we would run out of salt and material.”

There are 12 trained drivers for snow clearing at the county garage.

On Monday morning Lawrence County Sheriff Jeff Lawless put the county on a level 1 emergency status, the lowest one. But at 1:45 p.m. that moved up to a level 2 and remained that way until Tuesday afternoon.

Level 1 means roadways are hazardous, blowing and drifting snow and roads could be icy, according to Kathleen Fuller, public information officer for the Ohio Department of Transportation District 9. Motorists are urged to use caution. On a level 2, those conditions also exist plus only those who feel it is necessary to drive should be out on the roads. On a level 3, all roads are closed to non emergency personnel and no one should be driving unless absolutely necessary or with a personal emergency.

While determining those levels falls under the jurisdiction of the sheriff, Cade said Lawless will confer with him and the director of the Emergency Management Agency before making that call.

By 1 a.m Tuesday the snow that had started at around 6 a.m. the day before subsided. But weather reports of additional snowfall coming today and Thursday coupled with below freezing temperatures means crews will be out again for hours.

For those state crews charged with clearing state and federal routes, the past few days have been just as long for them.

“When the forecast came and we knew what we were anticipating on the weather, we started on 12-hour shifts,” Fuller said. “We keep them going until the roads are clear.”

There are 12 state and federal routes under District 9’s jurisdiction.

“With the colder temperatures material is not as effective,” she said. “We have been doing plowing overnight and with the sun shining it will help.”

ODOT is also monitoring the weather to determine if the Ironton-Russell Bridge should be closed this week.

“With temperatures to be below zero, we are in anticipation of that and crews are on standby to put up the barricades,” Fuller said.

Subzero temperatures will make the steel in the structure brittle leaving it vulnerable should a motorist skid into the framework.

“If it is struck, it can compromise the different parts of the bridge,” Fuller said. “We don’t have that worry, if we don’t have traffic on it.”

If the bridge is temporarily shut down, strain gauges will be monitored before it is reopened.

“We will be out until the storm is over and the roads are clear,” she said.

Duo Alves to perform at OUS

The next act slated to perform for the Ohio University Southern Community Concert Series is Duo Alves, a guitar-violin duo... read more