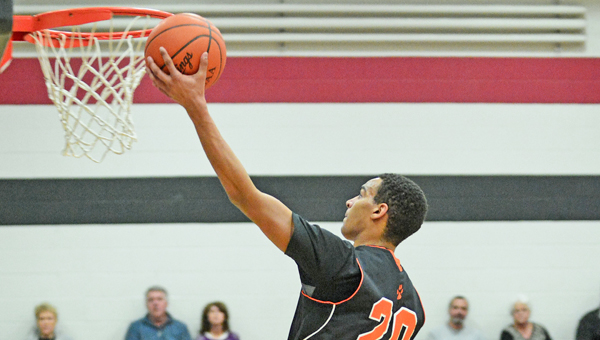 Ironton Fighting Tigers’ Dylan Malone goes high in the air to lay in two points during a recent Ohio Valley Conference game. Malone and Ironton battled past the Fairland Dragons 57-54 in overtime on Friday to finish the regular season 13-9. (Kent Sanborn of Southern Ohio Sports Photos)

PROCTORVILLE — If there was any question about his team’s character, Ironton coach Mark LaFon got the all the answers he needed the past two games.

With limited practice due to the recent snowstorm, Ironton had to play back-to-back nights against two talented teams.

The Fighting Tigers were able to rise to the challenge with a win Thursday at Coal Grove and a 57-54 overtime win over the Fairland Dragons on Friday in a pair of physical and grueling Ohio Valley Conference games.

“That was a lot of character for those guys to go out there and gut it out. They struggled but they fought through it,” said LaFon after Friday’s win.

“We won two tough games back-to-back. We played well under unusual circumstances the last two games. But now we have to be able to handle it and we have to do it on the tournament stage.”

Ironton finishes the regular season 13-9 and clinched third place in the Ohio Valley Conference with an 8-4 record.

The winning season is a bounce-back effort after just two wins last season.

The Fighting Tigers had three players in double figures led by Joe Bowling with 15 points — 13 coming in the fourth quarter and overtime.

Tristan Cox had 14 points and 10 rebounds while Phillip Kratzenberg scored 11 points. Dylan Malone had seven rebounds despite sitting out much of the game in foul trouble.

While the Dragons proved to be a young team this season, it was senior Chance Short who came up with the big game. Short scored 27 points and grabbed seven rebounds to lead Fairland (13-8, 5-6).

The game was tied 7-7 after a 3-ball by Ironton’s Marques Davis but Short’s 17-footer put the Dragons back in front.

The lead then changed hands three times before a 3-pointer by Fairland’s Luke Thomas tied the game at 14 and baskets by Kratzenberg and Campbell left the teams tied at 16 to end the quarter.

A free throw by Kratzenberg gave Ironton a 20-19 lead, but a layup by Tyler Campbell enabled Fairland to regain the lead and they stayed ahead until the fourth quarter.

“We wanted to slow it down in the second quarter and instead we got a quick trigger,” said LaFon.

“(Nathan) Campbell did a great job for them in the second quarter getting rebounds and making plays. I’m glad he’s a senior. I hope we never have to see him again.”

An 8-footer by Short gave Fairland a 33-22 lead to begin the third quarter.

Ironton then caught fire as Malone made a layup, Cox drained a long trifecta and Raphael Glover made a shot inside to cut the deficit to 33-29.

Short hit another 3-pointer but Kratzenberg answered with one of his own and Ironton cut the deficit to 39-36 to end the quarter.

A reverse layup by Bowling put the Fighting Tigers in front with 5:35 left in regulation for their first lead since the second quarter.

Howell hit back-to-back 3-pointers and Short hit another triple as Fairland went up 48-44 with under two minutes on the clock.

Bowling hit a 13-footer and Cox sank two clutch free throws with 46 seconds left in the quarter to tie the game at 48.

An Ironton turnover led to an easy layup by Kollin Van Horn that put Fairland up 54-53, but Kratzenberg and Cox each made a foul shot for the lead.

“Joe sat some because he was struggling, but he gave us a great effort down the stretch. He hit that big 3 and it seemed like everyone made a big play down the stretch and in overtime.”

Fairland missed a shot and Malone got the rebound. He fired a long pass to Cox who raced to the basket for a layup with two seconds on the clock.

The Dragons’ missed a shot but got the ball back when it was knocked out of bounds by Ironton. A long off-balanced 3-pointer was well off the mark and Ironton held on for the win.

Fairland’s future has a league make-up game at home against Chesapeake that has yet to be re-scheduled. The Dragons play South Point at 6:15 p.m. Wednesday in the sectional tournament at Jackson.

Staff Report   Due to the weather and annual special “Profile” section, Tribune deadlines were earlier than usual on Saturday.... read more