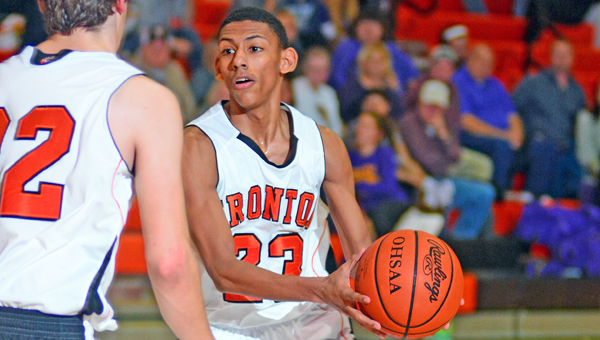 JACKSON — It might have looked like Ironton was on a date with Rosie O’Donnell, but the end result felt like dinner and a movie with Jessica Alba.

It might not have been a pretty site, but the Fighting Tigers 75-68 Division III sectional tournament win over the Wellston Golden Rockets looks just fine now.

Upset-minded Wellston hung with Ironton but the Fighting Tigers found a way to win as they advanced to the sectional finals at 8:30 p.m. on Friday against the Oak Hill Oaks at Jackson High School.

“We have to do a better job defensively and rebounding. And like I said, I’ll take a bad win because we’re playing again on Friday,” said Ironton coach Mark LaFon.

“It was just not a good performance all the way around, but like I said, I’ll take a bad performance for a win any day of the week in tournament.”

“They were more aggressive and once they got a little energy about them and a glimpse of we got a chance, then they started shooting the ball pretty good,” said LaFon.

“We did not do a good job, but hats off to Wellston. Their kids did what they had to do. Hats off to their coaching staff putting together a game plan.”

Ironton (14-9) struggled from the field in the first half as the Fighting Tigers made 11-of-30 shots from the floor. Their two leading scorers — Tristan Cox and Phillip Kratzenberg — were a combined 2-of-12.

Fortunately, Marques Davis came off the bench to hit three crucial 3-pointers in the second quarter and the teams went into the locker room deadlocked at 28.

“You mix in those two not shooting well and Dylan (Malone) not having a good game rebounding, so you’re talking about another factor taken out of the game. Fortunately, Marques (Davis) hit some big shots that we really needed,” said LaFon.

The game was tied three times in the first half and the lead exchanged hands seven time. Ironton held the largest lead at 10-4 after a stickback by Joe Bowling and at 14-8 when Bowling hit a short jumper with 1:57 left in the first quarter.

Tied 14-14 heading into the second quarter, the lead began to switch back-and-forth. Davis’ third trifecta gave Ironton a 25-21 lead but Chazz Davis had a 3-pointer and a layup with nine seconds left to keep the game tied.

LaFon was disappointed with Ironton’s defense in the half.

“I will say that in the first half I didn’t want to do a lot of pressing when I didn’t feel we needed to, but our halfcourt defense was not sharp. I don’t think I’ve yelled ‘help side’ that many times all year long combined, let alone in one game, and that hurt us,” said LaFon.

“We scored enough to be okay. It was 28-all at half, so you’re talking about a 56-point range you’re going for but you have to guard and we didn’t guard. We didn’t rebound.”

Wellston took a 35-30 lead on a trey by Braydon Womeldorf and it was 40-37 after a layup by Womeldorf.

But Cox drained a 3-ball to tie the game and trigger a 13-5 run to end the quarter that put Ironton up 51-45. Raphael Glover had two key baskets to close the quarter including one at the buzzer off a pass from Desmond Young.

Kratzenberg hit a trifecta and a layup to give Ironton its biggest lead of 59-47 with 6:12 to play.

Wellston got a triple from Ryan Hawk to trailed 61-56 but the Rockets were forced to employ the “hack and jack” and Ironton converted 11-of-12 from the line over the final 2:29 as Cox was 2-for-2 and Kratzenberg 9-of-10.

Kratzenberg led Ironton with 21 points. Davis had 14 points, Cox 9 points, and Bowling and Malone 8 each.

Bowling had seven rebounds while Young and Malone grabbed six each. Ironton held a 35-20 rebound advantage including 12-to-6 on the offensive boards.

Tickets for Friday’s game are $5 and are available at the Ironton High School auto shop during school hours. Ironton only receives a percentage of the presale.

Jim Walker jim.walker@irontontribune.com   SOUTH POINT — The first half went to Rock Hill and the second half to South... read more