Urbana more than happy to take chance on Chance 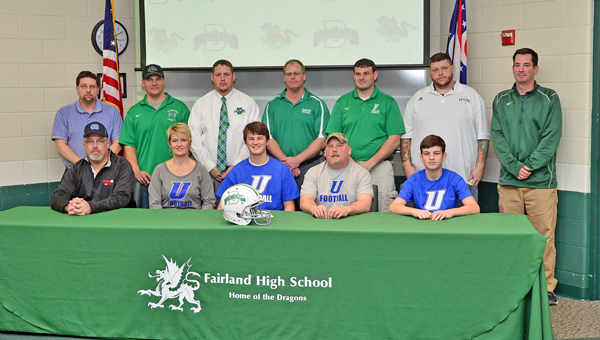 PROCTORVILLE — If Urbana had coach Dave Taynor wants to fill the airways, he’s got the right pilot.

The Silver Knights landed the quarterback they wanted on Thursday as Fairland Dragons’ senior Chance Short signed a letter-of-intent.

Not only did Urbana get Short to join their program, he will get a chance to pilot the offense early.

“(Taynor) wants me coming up this summer. I think I’m going to compete as a starter as a freshman. That will definitely be good,” said Short.

Besides Urbana, Short had talks with Glenville State, the University of Charleston and Ohio University among other schools. However, it took some time before Short made his decision to play.

“I kind of turned down the first offer. I wasn’t sure if I was going to play football. I kind of wanted to stay home with my family and then they called me back again and there was just something about it that I wanted to go,” said Short.

Playing quarterback in the Urbana system will be a good fit for Short. He said the Silver Knights offense is similar to the offense he ran at Fairland, especially his junior year when he was 195-of286 for 2,891 yards and 27 touchdowns in leading the Dragons to the Ohio Valley Conference title and a berth in the playoffs.

“It’s more of the system I ran with coach (Brent) Wilcoxon my junior year, more up tempo,” said Short.

“But he’s kind of a guy with numerous tempos, kind of control the ball more than what we did my junior year. And he really airs it out which is what I like. They want me to run a little more which is all right. I like to use my athleticism a little bit.”

Short is also the Dragon’s leading scorer in basketball. He had the option of playing college basketball, but elected to continue his career in football.

“I just really enjoy football. I love football a little more than basketball and when I went up to Urbana and met coach (Dave) Taynor and coach (Paul) Smith who is the one who recruited me, I just really liked them. I liked their system. I just fell in love,” said Short.

The Dragons’ all-time leading passer with more than 5,000 yards said there was some thought about basketball, but now it’s more of an inside joke.

“I joke around with coach Smith a lot. I send him my highlights from last night’s game and say ‘tell the basketball coach to help out with the scholarship. Tell them I’ll play postseason with you guys.’”

Fairland Lady Dragons’ guard Caitlin Stone signed earlier to play at Urbana. Short said it will be a plus to have someone on campus he knows when he arrives.

“Just having someone I’m accustomed to seeing every day in the hallways (is an advantage). It does make it nice to have someone I at least know up there and I’m not just going up blindsided,” said Short.

Short said playing games close to home was a factor in his decision.

“All my family will be there a lot and I like coming home,” said Short.

The selection of Urbana was helped by the hometown feeling Short got from his visit.

Short plans to major in communications with plans to get a graduate assistant’s job and work toward a career in journalism.

“I like to write a lot. I would do broadcast, too, just where ever the job is at,” said Short.

He is the son of Wendy and Paul Short of Proctorville.

COLUMBUS (AP) — Playing just their second game in their own arena in the last 28 days, the Ohio State... read more