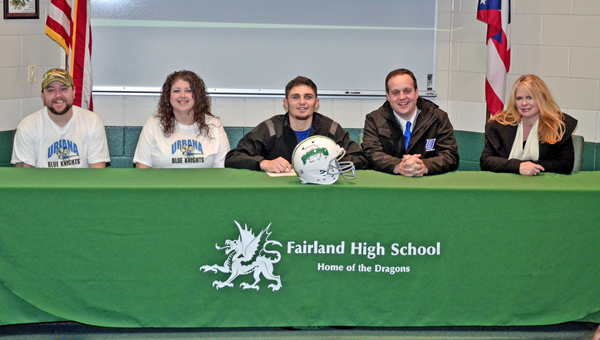 Evidently, the plus side at Urbana University far outweighed any of the competition.

Murphy signed a letter-of-intent with the Urbana on Tuesday as he opted for the Blue Knights’ program over Central Michigan, Ohio Dominican, Akron, Central Connecticut, Glenville State and Southeastern Missouri.

There were a plethora of reasons that led Murphy to choose Urbana, but one key factor was teammate and friend Chance Short signed with the Blue Knights last week to play quarterback.

“They just had a real nice academic program and me and my buddy Chance talked it over really well and I wanted to go into criminal justice administration and it just felt like home there,” said Murphy.

“We’ve been playing together for 13 years and we didn’t want it to be over. We just felt like we had some unfinished business.”

Murphy was used mostly on defense as a junior but still caught 14 passes for 228 yards and two touchdowns.

As a junior, Murphy had 36.5 tackles including an amazing 13 quarterback sacks to help the Dragons win the Ohio Valley Conference and earn a postseason playoff berth. He also had an interception.

He was a staple of the offense last season and became the favorite target of Short as he racked up 53 receptions for 1,098 yards and 15 touchdowns.

Murphy said he talked about offense and defense with the Urbana coaches.

“They made it optional. I think I want to play wide receiver just because I feel like if I played defense my body couldn’t hold up with as many injuries as I’ve had. I feel like I couldn’t make it through four seasons of that,” said Murphy.

“I felt like they were really interested and when I went up there they felt more interested in me than any other team and I felt I could work my way in (to the starting lineup) there eventually.”

Short and Murphy will have another familiar face at Urbana. Fellow Fairland senior Caitlyn Stone has signed to play for the women’s basketball team.

“It helps having someone else around. That way you’re not so nervous and having Caitlyn, too, we’ve grown up together,” said Murphy.

“It just helps having someone else there to help you with school work and when you need somebody there when you’re feeling homesick and all those good things.”

Although Murphy is interested in the criminal justice program, he had the experience of acting in the 2012 History Channel special “Hatfields & McCoys: America’s Greatest Feud.”

“I think the coolest thing about appearing in “The Hatfields and McCoys was the family connection,” said Murphy.

“My dad was the producer and, although I played a McCoy boy, my great-great-great uncle was actually Devil Anse Hatfield, the leaders of the Hatfield clan.”

And while Murphy plans a career in criminal justice, he knows acting could be a contingency plan.

“My mom would like me to (act),” said Murphy with a chuckle. “But if all fails, I guess I could.”

The senior receiver quickly added, “I want to thank my parents and family for their support and to give me the courage to do this. I never dreamed I’d ever get a chance to play college football.”

Dylan is the son of Kari Ward and Joe Murphy.

Jim Walker jim.walker@irontontribune.com   ROCKSPRINGS — In this case, it mattered how you started AND how you finished. The Waterford... read more