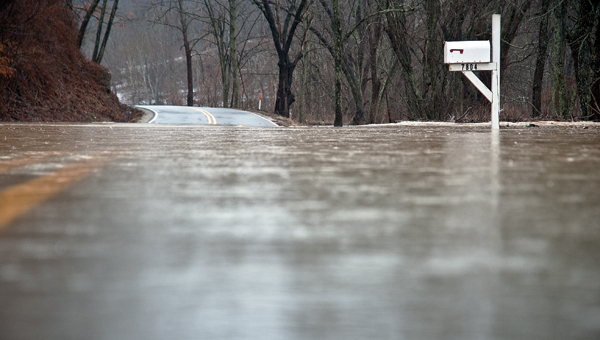 Floodwaters take over County Road 4 in Pedro near the 8-mile marker on Wednesday afternoon.

The rain may have washed away the snow that often seemed close to paralyzing the area for the past two weeks. But that doesn’t mean Mother Nature has brought some good news.

In fact, it appears it will be quite the opposite as state and county road crews prepare for road closures because of flooding.

“We could get up to six roads closed by the time the river crests in a couple of days,” Lawrence County Engineer Doug Cade said. “We are monitoring, going and physically looking at each site.”

First to close was Hog Run Road or County Road 181, which is always affected by heavy rains.

Next on the engineer’s list are County Road 22 or Lawrence Street, County Road 42 or Athalia Road; County Road 402 or McCall Creek and possibly part of County Road 123 or Chesapeake-Symmes Creek Road.

“It may not get over the road at 123,” Cade said. “We fixed the slip there and a few inches make a big difference.”

Besides high water, county crews are also watching when roads are closed to make sure road closure signage is not removed by motorists.

“We are monitoring areas where we have signs and if they are stolen we put them back up,” the engineer said.

The first state route to close was State Route 93 between County Road 4 or Etna-Waterloo Road and Township Road 623 or Sand Hollow Road. That was quickly followed by the closing of State Route 218. At that time State Route 650, State Route 7 and State Route 775 had only one lane passable.

“We know where those watch areas are, what routes are prone to high water because of the topography,” Kathleen Fuller, public information officer for District 9, the Ohio Department of Transportation, said. “What routes are likely to have the potential for flooding because of tributaries when we get a lot of rain in not quite 24 hours.”

ODOT also relies on reports from law enforcement including the county sheriff’s office and the Ohio State Highway Patrol as well as motorists.

“The general public. We are happy when they call and we will send a crew out,” she said. “Flash flooding can happen very quickly. You get an early rain and the culverts haven’t had a chance to get cleaned out. Water has nowhere to go. It creeps up on the highway where you wouldn’t expect high water.”

With miles of floodwall surrounding the city of Ironton superintendent Mike Pemberton has been watching the Ohio River to determine if the floodgates will be put up.

“We are monitoring the river level,” Mayor Rich Blankenship said. “At this point in time, it is too early to tell. We have to take it day by day. Mike Pemberton gets readings from upriver and it tells us where we are going to be at a certain time. At that point he makes that determination. Hopefully we don’t have to. You never know.”

A man accused of murder and those who allegedly helped him answered their charges Wednesday in Lawrence County Common Pleas... read more