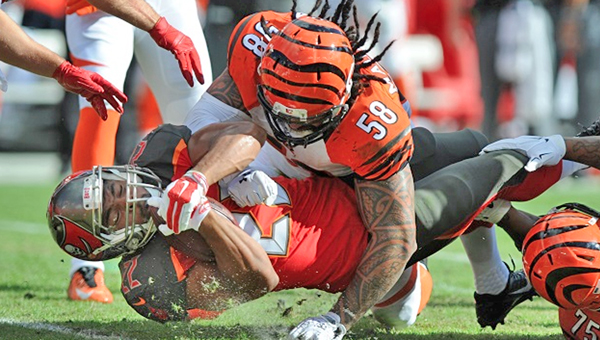 CINCINNATI (AP) — The Bengals agreed to a three-year deal with Rey Maualuga on Thursday, keeping one of their top linebackers from leaving as a free agent.

Cincinnati’s defense slipped from third in the NFL in 2013 to 22nd last season, when Maualuga and linebacker Vontaze Burfict missed significant time because of injuries. After Maualuga returned after missing four games with a pulled hamstring, the run defense improved significantly.

Maualuga, a second-round pick in 2009, could have become an unrestricted free agent next week.

“Rey is a physical force on the field and a great teammate in our locker room,” said coach Marvin Lewis, who named Maualuga a team captain in 2012. “He’s a hard-working, dedicated player who continues to get better.

“As we have put together playoff teams the last four years, we’ve said more than once that a huge key is keeping productive players who know our system, and this is another big step in that plan.”

The Bengals have reached the playoffs each of the last four seasons — a franchise first — but lost in the first round each time. They haven’t won a playoff game since the 1990 season, the sixth-longest streak of playoff futility in NFL history.

Burfict missed most of last season with concussions and torn knee cartilage that required surgery, leaving his status for the start of next season unclear. The Bengals will try to add depth at the linebacker spot in the offseason.

Maualuga is known for stopping the run. Lewis challenged him to become more of a team leader during the 2012 season, and the linebacker responded so well that he was designated a team captain.

Cueto impressive in spring debut but Reds fall to Indians

GOODYEAR, Ariz. (AP) — Cincinnati’s Johnny Cueto made his spring debut and allowed one hit and struck out two in... read more