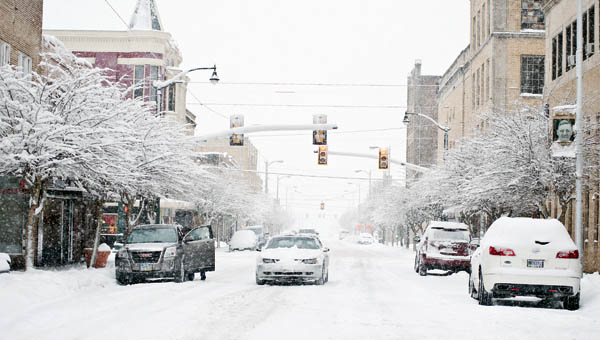 A Level 2 snow emergency kept many residents at home during the business day in downtown Ironton on Thursday.

It would have been a little easier to deal with Mother Nature, if she had cooperated just a bit.

But she didn’t. That’s what county road crews found when they came to work on Thursday morning.

“We were trying to wait for the snow to die down,” Lawrence County Engineer Doug Cade said. “But it kept coming.

By10:30 a.m. Cade admitted it was an uphill battle. Already three trucks had skidded into ditches. There are 12 snow routes with crews dispersed simultaneously through the county — 10 are trucks and two are motor graders.

On top of the snow many of the roads had been flooded, adding more ice to the cleanup. First efforts just concentrated on getting up the snow.

“We put salt and material down, but it is snowing so fast, we plow over it,” Cade said.

The Lawrence County Sheriff declared the weather had caused a Level 2 emergency, meaning roadways are hazardous with drifted snow and possible ice. Extreme caution in driving is advised. As of this morning that classification remained.

Crews were out on a long day on Thursday with more of the same expected for today.

“We work as long as we can, as long as we are physically able,” Cade said. “Sometimes it is eight hours or 14. We try not to work many 14-hour days. Just because people get so exhausted.”

A Chesapeake man accused of breaking into several businesses in the Rome Township area answered the charges against him Wednesday... read more