Little pellets have lots of uses 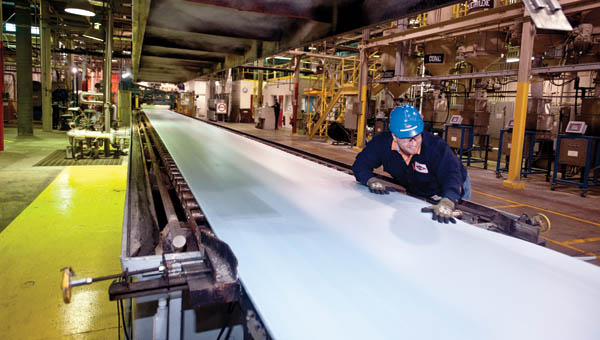 An employee with Dow Chemical smooths out Styrofoam at the Hanging Rock production site.

Brian Funk and Carl Darling understand that. Funk makes Styrofoam; Darling makes the stuff that makes the cup. They’re the same and they’re not the same.

Like cousins coming out of a multi-tiered family, the two materials can trace their roots back to the same chemical patriarch, but they have their own individuality and their own function.

It’s not that white cup.

One of six Dow Chemical operations in the United States and Canada, the Hanging Rock plant produces 150 million-4-by-8-board feet of Styrofoam a year.

Those boards dyed with Dow’s trademark robin egg blue are headed to big box stores like Home Depot and Lowe’s.

“The foam goes into the bottom of roads,” Funk said. “It’s hard enough to go below a road. It isolates it from the earth and the roads don’t crack. It traps air in or out.”

The process takes about an hour starting with polystyrene pellets — a synthetic polymer — like sleet that come from 50-foot-high silos outside the plant into bins where heat melts them into a gel. Then that is expanded into the foam boards.

Next boards coming off the line are shrink-wrapped and stacked in 8-foot-tall units in outside storage.

Across from the Dow plant in the same complex is the Hanging Rock plant of AmericasStyrenics, with manager Darling, a joint venture between Trinseo and Chevron Phillips. Trinseo was created in 2010 by combining four of Dow’s businesses: polycarbonate and compounds and blends; paper and carpet latex; synthetic rubber; and styrenics (polystyrene, ABS/SAN resins, expandable polystyrene).

Here is where the material that goes into the white coffee cup, disposable silverware and plates and clamshells is made.

“Styrene liquid comes up from Louisiana on barges and is off-loaded into a tank at the (Ohio) River,” Darling said. “It’s pumped one mile in a pipeline up here.”

Much in the same way as the process for Styrofoam, the piped-in styrene, which is as flammable as gasoline, is heated up to transform it into polystyrene beads that are then shipped out to customers.

Varying the recipe just a bit can create two different kinds of polystyrene: clear that is used for general purpose and high impact that turns out white because of the addition of rubber.

Bales of rubber are launched via suction to go into the heating process to turn out the higher grade.

One million pounds of polystyrene pellets are produced at the Hanging Rock plant a day. About 45 percent will go into railcars; 45 percent will be shipped out via hopper trucks and the rest will go by way of smaller vans.

Ohio WWII vet gives his life to save beloved wife

COLUMBUS (AP) — Betty Biddle walked through her house yesterday holding a picture of her husband, Clark. Now and then,... read more