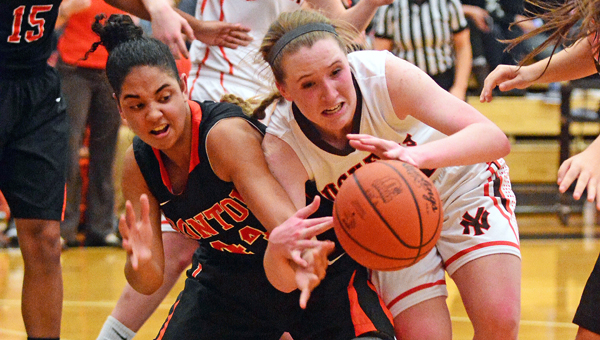 Talk about a tough tournament.

Ironton is making its first regional appearance since its Final Four run in 2010.

The Lady Fighting Tigers go nine deep with their up-tempo style of play led by 5-foot-11 junior and Virginia Tech commit Lexie Barrier with 19.8 points and 9.3 rebounds a game.

Sydney Webb — a 5-7 sophomore — averages 11.8 points a game including 46 percent from the field and 39 percent from 3-point range.

The other three starters are 5-5 Taylor Hannan — the team’s lone senior —along with 5-9 junior Cheyenne Scott and 5-9 freshman point guard Lexi Wise.

The Lady Cadets are led by 5-foor-10 senior Megan Liedtke who averages 18.8 points a game and 6-foot junior Alexis Enochs with an 11.8 scoring average.

Liedtke was first team on the Eastern All-District team and Enochs third team.

Megan Liedtke, Enochs and Adkins can all shoot 3-pointers.

Fairland and Wheelersburg are meeting for the second time this season. They met at Fairland during the regular season with the Lady Dragons winning 69-57.

Leading Fairland is 5-9 senior Kelsey Riley with 12.2 points and 5.7 rebounds a game and 5-5 senior guard Caitlin Stone who scores at a 14.9 clip and has made more than 80 3-pointers on the season while shooting 40 percent from behind the arc.

Wheelersburg is led by 5-9 junior Sydney Holden with a 15.5 scoring average and 5-3 senior Brooke Smith who scores 15.7 points per game.

Wednesday’s winners advance to the regional title game at 1:30 p.m. on Saturday.

The Logan regional winner will play at 8 p.m. on Thursday, March 19, in the state tournament semifinals against the Ada regional champion.

The state championship game is 2 p.m. on Saturday, March 21.

BEREA (AP) — Johnny Manziel’s commitment to fixing his personal life has the Browns feeling positive about his future as... read more