Strike still on at refinery 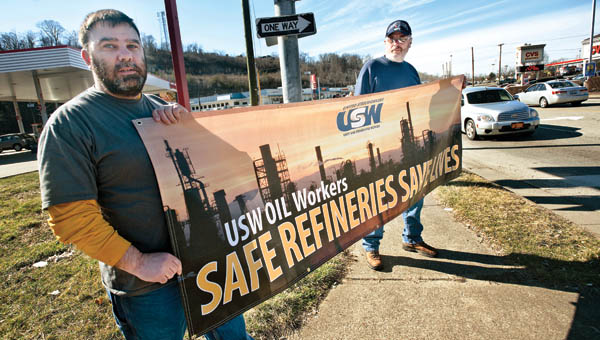 Mike Roark, left, and Curt Maynard, right, hold a sign at the corner of the Speedway gas station along 13 Street in Ashland as they and other Marathon Petroleum employees continue their protest efforts.

The nationwide strike for oil workers appears over after an agreement was reached on Thursday between Shell and the United Steel Workers.

However, the workers at Marathon Petroleum’s Catlettsburg remain on the picket line they started manning on Feb. 1.

“We have local issues to go back to the table to get settled,” Dave Martin, vice president of USW Local 8-719, said. “We are officially on strike.”

Local 8-719 represents the more than 400 workers at the refinery. Both nationally and locally, one of the main issues has been safety at the refineries, as well as outsourcing jobs. Those issues remain at the heart of the dispute at Catlettsburg.

“We won’t go back until we settle our local issues,” Martin said.

On Thursday the union held an informational rally at Speedway in Ashland, handing out fliers. Two weeks ago, the local started distributing yard signs in support of the strike.

“We have 800 signs and are asking people for their support,” Martin said. “They are out everywhere.”

Signs can be found in yards in Ironton, including Fourth Street, and the exit at Hanging Rock. That’s on top of strikers staying out at lines at the refinery site off U.S. 23.

“Even with all the bad weather, we have kept our picket lines manned on eight-hour shifts,” Martin said. “There are 11 assigned for each shift and most of the time there will be more than 11 people out there. Once the schedules are changed next week there will be 18 people per shift.”

Marathon spokesman Chuck Rice said the company had no comment as of Friday to the settlement or the continued strike at Catlettsburg.

“We have been ready and willing to meet the whole time,” Martin said. “We are ready to go back to the table. The ball is in their court.”

The Friends of Ironton, in collaboration with the Ironton Kiwanis Club and Ironton aLive, will host the Great River Craft... read more