Seniors lead Fairland back to Final 4 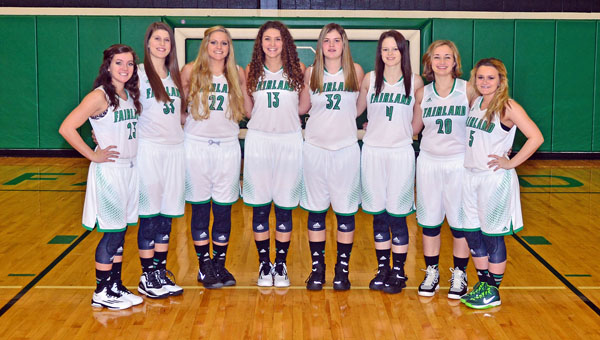 After the Fairland Lady Dragons lost in their first-ever Final Four state tournament appearance last year, the idea of returning was scoffed at by many fans, critics and observers.

“I think a big part of it is our players — led by Jenna Fulks — after we lost in the state tournament last year said, ‘Coach, we’re going to do everything we possibly can to get back here.”

Buchanan said the seniors were a main reason, not only because of their experience and being in similar games, but they had a different attitude.

“I know a lot of people didn’t think we could do it. A lot of people thought we were missing too many pieces, but the girls said we’re going to do everything possible to get back here. I can tell you when we got down 12 to Fort Frye (in the regional finals) and we only had nine points in the third quarter, it looked pretty bleak,” said Buchanan.

“A couple of positive plays happened for us. We got a couple of scores and our spirits were up and you could just tell our seniors did not want to lose. They just have a ‘I’m not going to quit’ attitude.”

That positive play and never-say-die attitude helped the Lady Dragons to a 21-5 record and a state semifinal game against Ottawa-Glandorf (25-2) at 8 p.m. Thursday at the Ohio State Schottenstein Center.

Kelsey Riley — a four-year starter — said this season’s success was due to the team’s work ethic.

“We all work hard. We come to practice. We’re never, ‘I’m sick, coach. I can’t come.’ Everybody shows up whether you’re watching, you’re participating, everybody works hard all the way around whether you are a starter or not,” said Riley.

Three-year starter Stone — who has signed with Urbana — is the team’s top 3-point shooter and leading scorer. But she said this year has been a total team effort.

“We have a lot of good players on the team, so I feel like just taking me away doesn’t affect it that much. Just because they take away me, we have Kelsey and Mackenzie scoring all the time. If they take away one of them, we have me shooting, so it’s kind of a hard decision to just guard one person really hard because we have five players on the court that can score any time,” said Stone.

Mackenzie Riley said there has never been any doubt in the players’ minds that they would make a return trip, especially after losing the season finale to Chesapeake in an upset that cost them a share of the Ohio Valley Conference title.

“Honestly, at the beginning of the season I think we all just had it really set in our hearts that we were going to be back there,” said Mackenzie Riley.

“Personally, after we lost to Chesapeake to lose the conference, I knew that the only thing that would really make me happy after that was to be back in Columbus.”

Fulks was a backup the past three years to 6-foot-4 Terra Stapleton who signed with Michigan. She accepted her role this season with open arms.

“I really like to bring as much energy to the team as I can. Obviously, it’s really difficult to replace someone who is 6-foot-4, D-1 commit, but my team has really helped me there,” said Fulks.

“I just try to always bring up the energy when I’m not playing well. It’s hard when you play those 32 minutes straight and the games are so close.”

The biggest thing that has impressed Buchanan is the leadership of the senior group at practice and in the games.

“In my previous five years I had 12 total seniors and eight this year. Kelsey, Stone, Mackenzie Riley and Jenna Fulks have been part of those years,” said Buchanan.

“We pretty young other than those players. They show (the younger players) how we do things. We’ve been successful enough that when our kids get to a district final or a regional tournament, we expect to win. We’ve been here. This is what we do. We win these games.”

Those seniors have been helpful to the other seniors as well. Staten played a limited role last year and did not play in the state tournament.

“They just give me confidence and boost me up and kind of help along with the playing. They said just expect the big arena and a lot of people, expect to be nervous,” said Staten.

“(Coach) just expects me to get the ball to my teammates and put them in the best position to score.”

Stone, Fulks and Kelsey and Mackenzie Riley all think their experience last year will help in this trip.

“I think that shock value won’t be there. We’ve played there, we know the lights, the atmosphere, and I think that helps us a lot,” said Kelsey.

“It’ll get some of the initial nerves out, but there’s always going to be nerves. We know a little bit what to expect, but we’re not letting that affect how we’re going to go out there and give it our hardest,” she said.

Stone said being used to the background is an advantage.

“It’s kind of like a home advantage. We know how to play on that court. We know it’s bigger. We know what to expect,” said Stone.

“It’s a very different atmosphere to say the least. You come in these high school gyms and you’ve got the hoop and the (background) behind you. Everyone is right there with you, but then you get in that big stage like that and everyone is kind of spread apart and you really feel isolated, but I’m excited for it.”

While five seniors prepare for the game, Huff, Edwards and Warnock plan to fill their roles to help the others achieve the goal of a state title.

“Hustling, getting back on defense, and going as hard as you can is our job,” said Huff.

“We’re the ones who they always scrimmage against in practice and we always have to bring our best because if we don’t bring our best it’s hurting the whole team,” said Warnock.

GLENDALE, Ariz. (AP) — Pete Rose has submitted a new request to be reinstated to baseball. Rose agreed to the... read more