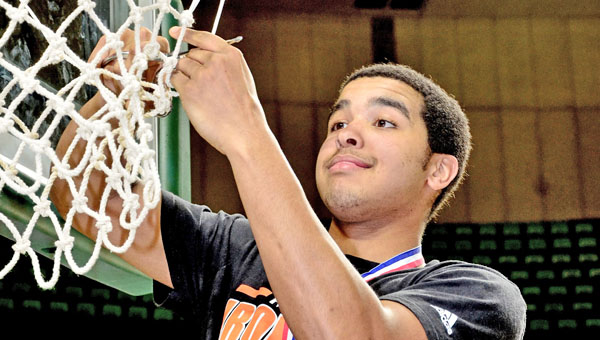 After winning its 15th district title on Saturday, Ironton (17-9) will now play a familiar foe in Portsmouth (18-6) as the teams meet at 8 p.m. Wednesday at Ohio University’s Convocation Center in the Division III regional semifinals.

The winners meet at 7 p.m. Saturday for the regional title and a berth in the state semifinals at 5:15 p.m. on Thursday, March 26, at the Schottenstein Center on the campus of Ohio State University.

“We each won on our own floor. This is s neutral site and Portsmouth has had a lot of success at the Convo,” said Ironton coach Mark LaFon. “We’ll have to play a great game on both ends of the floor.”

Portsmouth — with 37 district titles — is led by 6-foot-2 Ky’re Allison with an 18.1 scoring average that earned him the Southeast District Player of the Year honors.

The Trojans’ 6-foot senior point guard Sky Oliver is next on the team with a 13.5 scoring averages.

“Portsmouth has five players who can hit the 3-pointer, but they can also drive to the basket. They put a lot of pressure on your defense and make it tough to match up with them,” said LaFon.

Ironton will starter Tristan Cox who leads the team with a 14.8 scoring average, Joe Bowling with 10 points a game, Phillip Kratzenberg at 10.15 points a game, Marques Davis and Desmond Young.

A key player off the bench is Dylan Malone who averages 11.5 points and 10 rebounds a game.

In the first game Wednesday, the Union Local Jets make the school’s first-ever regional tournament appearance as they face the speedy and athletic pressure-style game of the Eastmoor Warriors.

McDiffitt has hit a school record 75 3-pointers this season. The 6-4 Tipton averages 14 points and six rebounds as a swingman.

The center is the 6-4 Paulick who averages 7.7 points and 6.3 rebounds. McKivitz — who has signed to play football at West Virginia — averages 6.8 points and 7.5 rebounds.

Off the bench are Mott who shoots 45 percent from 3-point range and Colton Burnheimer with a 3.4 scoring average.

The Warriors are led by point guard Xavier Holston-Sims with a 9.5 scoring average and senior Jalen Lewis with a 16.5 points per game.

The fifth starter is 6-3 junior Oseratain Onaiwu with 10.3 points per game.

Eastmoor and Ironton have a similar opponent. Ironton lost 54-44 to Columbus South while Eastmoor split their series, winning 64-57 before losing 63-52.