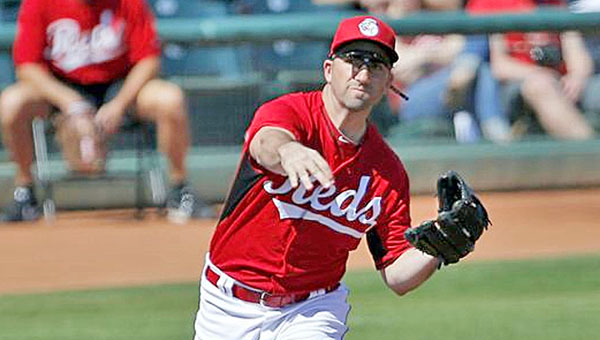 Josh Satin hit a three-run homer to help the Cincinnati Reds beat the Oakland A’s 4-3 on Sunday in an exhibition game. Satin is trying to make the team as a reserve player. (Courtesy of The Cincinnati Reds.com)

GOODYEAR, Ariz. (AP) — Josh Satin bolstered his case for a spot on Cincinnati’s bench, hitting a three-run homer in the eighth and a game-ending RBI single in the Reds’ 4-3 victory over the Oakland Athletics on Sunday.

Leake allowed his first run of the spring on Mark Canha’s RBI double in the fourth, but Ike Davis was thrown out at the plate on a nice relay by center fielder Skip Schumaker and shortstop Zack Cozart.

Athletics right-hander Kendall Graveman allowed one hit and walked one in 5 1-3 scoreless innings. He also struck out five.

Graveman has allowed one run in 15 innings this spring.

“He got six up,” Athletics manager Bob Melvin said. “He was able to do that because of his pitch counts.”

Leake was charged with one run and four hits. He struck out two and walked none.

“Leake was outstanding, changing speeds, using his cutter,” said Reds manager Bryan Price, who was the pitching coach under Melvin with Arizona. “It was the first time I’ve seen Graveman. He has a very good sinker-cutter combination that gave us a lot of trouble. Both pitchers were very stingy and impressive.”

Reds: Leake becomes Cincinnati’s No. 2 starter with Bailey out for the start of the season. The 27-year-old right-hander was so efficient that he had to go to the bullpen to throw 10 more pitches to reach his targeted pitch count of 75.

“I was happy with the outing,” Leake said. “There were a few balls I rushed that I elevated.”

Reds: Jason Marquis, who is making a strong bid to win a spot in the rotation, will make his fifth start against Texas on Monday night. RHP Alex Gonzalez will pitch for Texas. RHP Kevin Gregg, RHP Burke Badenhop and RHP Sam LeCure will pitch after Marquis.

Ike Davis singled off Leake. They were teammates at Arizona State, and Davis celebrated his 28th birthday on Sunday.

The Associated Press   Jahlil Okafor powered Duke into the Sweet 16. No such luck for a pair of No.... read more