Back to the table 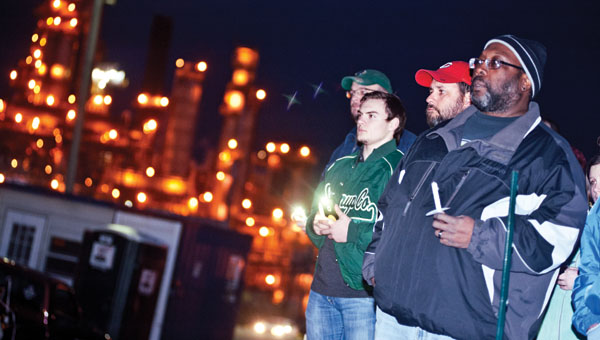 Members of USW Local 8-719 gather outside the Marathon Petroleum refinery in Catlettsburg as they take part in a vigil marking the 10 year anniversary of the Texas City Refinery explosion. The refinery workers have been on strike for almost seven weeks, citing safety issues.

CATLETTSBURG — As candles glowed in the night at the main gate of the Catlettsburg refinery, members of USW Local 8-719 started preparing to go back to the negotiations table today.

“They were supposed to send us a proposal through a mediator,” Dave Martin, vice president of the local, said.

That proposal wasn’t sent to the union, he said.

A candlelight vigil that started at 8 p.m. Monday was to remember the 10th anniversary of the explosion at the Texas City Refinery, owned by BP, that killed 15 workers and injuring close to 200.

Last week was the first time the local and management sat down to hash out a new contract, following the settlement earlier this month of a nationwide oil strike. The Catlettsburg workers have been out since Feb.1.

Locally issues revolve around what the union says are an unsafe working environment at the refinery and outsourcing of jobs to non-professionals.

The two sides, with a federal mediator, met three days lastweek at the Ashland Plaza Hotel, but did not advance the strike settlement.

During those sessions the union offered to drop many of its proposals and return to the contract extension made in January to the 2012 agreement.

“They rejected it,” Martin said. “They said we were too far along in the process to do that.”

Marathon spokesman Chuck Rice said the company is always available to meet with the union to resolve the strike.

AG opinion not changing stalemate   It depends on who’s talking. One side says the disputed $500,000 that could be... read more