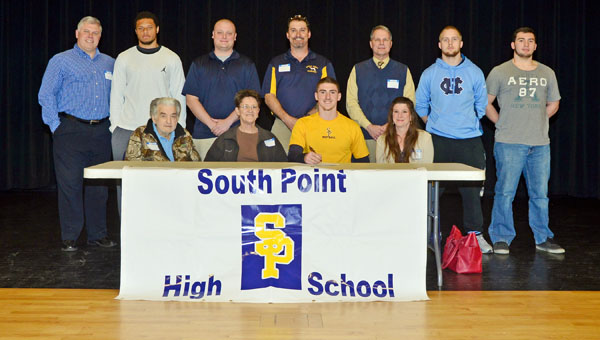 SOUTH POINT — “In the clearing stands a boxer,

And a fighter by his trade

And he carries the reminders

Of ev’ry glove that laid him down

Or cut him till he cried out

In his anger and his shame,

But the fighter still remains.”

When Paul Simon wrote the song “The Boxer,” Gage Townson wasn’t even born.

But after what the South Point Pointers’ senior quarterback has experienced this past season, it could easily be his theme song.

Townson — who boxes part-time under a trainer who happens to be his father Rob — suffered a freak ACL injury just before the start of the 2014 football season and he didn’t take a single snap.

But Townson wasn’t about to go down for the count. After undergoing knee surgery, he used intense therapy workouts to get himself back in shape.

The work and determination reaped its dividends on Monday as he signed with the Golden West Junior College Rattlers in Huntington Beach, Calif.

“Obviously it was God. If it wasn’t God, I don’t know what it would be,” said Townson. “Just staying tough through all the therapy, staying disciplined and trying to take no days off, and whenever it hurts, just think about the ultimate goal that I’ve worked for so long.

“I just knew I was going to play college football no matter what happened. No matter if I tore up my knee or whatever, If I had a chance to play I wasn’t going to let my knee stop me.”

Before the injury, Townson visited with numerous schools including Ohio University, Akron, Bowling Green, Kent State and Toledo. He also visited Ohio State and Indiana but scratched a visit to Purdue after his knee injury.

Townson admitted that he didn’t know anything about junior colleges until he began his search for a program that fit his situation.

Looking through some possible schools, Townson saw some athletes like Cam Newton and Carlos Hyde who played at junior colleges before transferring to Auburn and Ohio State, respectively.

“I looked into it and the first one that popped up was the No. 1 passing offense in California, so I thought I’d shoot them a quick email,” said Townson with a laugh. “It was kind of out of the blue, but I was fortunate there.”

“He said the competition there is good and I’d definitely have to work for a starting spot, but he said as long as I do as good as I can, I shouldn’t have any trouble,” said Townson.

Although JUCOs can red-shirt and that is a possibility if his knee isn’t ready, Townson said he was cleared to play by doctors on Monday and he expects to be ready.

Townson’s junior season saw him amass some impressive numbers and put him in position to be the key to the 2014 season.

He threw for 2,252 yards and 25 touchdowns while running for 391 yards and seven more scores. His total offense was 2,643 yards and he accounted for 32 touchdowns.

“Gage has the foundation to be a very good quarterback,” said Marcello. “When we first got here, I told him we wanted to do the spread. He said he was more than willing and capable. I said, ‘you have no idea what you’re about to do. We have to work on your throwing motion and everything.’

“He adapted quickly. He’s such a good athlete. In my opinion, I told him all along, when you go to college you may want to be a quarterback and you could be a very good one, but don’t rule out playing any other position because he’s that good on the field. He can be a wide receiver, he can be a quarterback, he can be a defensive back, safety, anything he really wants to be.”

Townson said prior to his injury that a lot of schools talked to him about playing defensive back so he wouldn’t rule out anything.

“If I’m on the field, I’m happy,” said Townson. “It doesn’t matter where I’m at. I love the quarterback position because I like having the ball and control of the game. But I love contact. I love defense. Defense is my favorite thing.”

Townson’s injury forced the Pointers to revamp their offense just before the season began and they struggled to go a 2-8 record.

Marcello was happy that Townson was getting a chance to play at the collegiate level.

“(Gage) has worked so hard. He started as a freshman really before he should have. He never played with fear. He had the confidence that you would want your starting quarterback to have, but at the same time always willing to learn which made him a dream for a coach,” said Marcello.

“This had been a day he’s been waiting for I know for a long period of time and I’m just glad to see him get it and he’s certainly deserving of it.”

Jim Walker jim.walker@irontontribune.com   JACKSON — The smaller schools teamed up on the larger schools. In the District 13 Basketball... read more