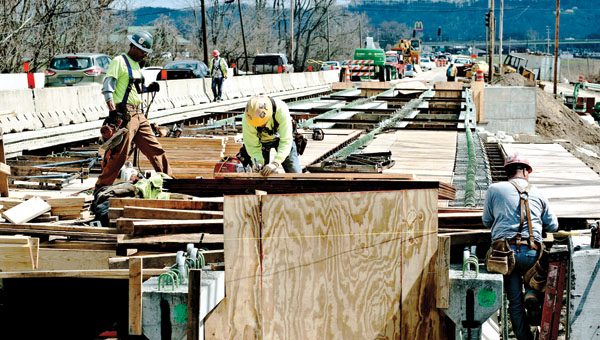 PROCTORVILLE — Getting to the Lawrence County Fairgrounds this year should be easier than last summer as the Indian Guyan replacement bridge project should be completed by then.

The $2.8 million project by Complete General Construction of Columbus started in April 2014 and slowed traffic down to one lane since then.

“We are on target to be completed by the middle of May,” said Kathleen Fuller, public information officer for the Ohio Department of Transportation District 9. “We had a lot of flooding and it washed out. The causeway below had to be rebuilt. But the work they have been doing is above the water. They should be able to get in there and continue working.”

On the other end of the county work is also winding down on a signalization project on U.S. 52 by the Ashland-Coal Grove bridges that has also slowed traffic from time to time since this past summer.

“They were replacing the whole lighting system,” Fuller said. “All of our signs have to go through an upgrade. It is part of the Federal Highway Administration regulations when they become outdated. They have to be upgraded, if the lighting signals start to malfunction and they wanted to change the coordination of the traffic flow to improve it.”

All that is left is to set three new light poles. The timeframe for workers, also from Complete General, to come back on the job has not been set yet.

“They have to submit a plan and that is pending,” Fuller said. “When we approve it, they will go in and do it. We will get some advance notice.”

During that time for a few days traffic will be temporarily restricted.

The man at the center of one of the most tragic events in Lawrence County’s history is dead. Todd Hall,... read more