Reds have plenty of questions to answer 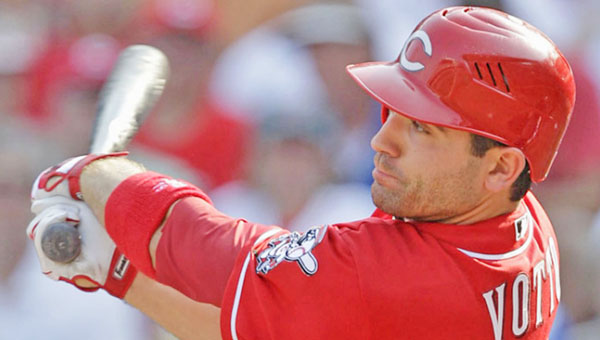 A healthy Joey Votto will be just one of the keys to the Cincinnati Reds’ season. (MCT Direct Photo)

CINCINNATI (AP) — The rotation was Cincinnati’s strength in an otherwise disappointing season last year. It’s the Reds’ biggest question as they try to move forward.

They’re not sure what they’re getting beyond 20-game-winner Johnny Cueto and Mike Leake, the only two holdovers who are healthy enough to pitch as the season begins. They’ve got some veteran retreads and unproven young starters trying to hold it together.

The rotation could be a work in progress well into the season.

“I know what the regular lineup looks like,” second-year manager Bryan Price said. “The biggest challenge is the bullpen and deciding roles and finalizing the last two starting pitchers.”

The Reds created two openings by trading Mat Latos and Alfredo Simon in the offseason. Homer Bailey hasn’t fully recovered from surgery on his forearm and won’t be ready until at least mid-April.

Cincinnati is counting on Anthony DeSclafani, who was acquired from Miami in the trade for Latos, to fill one of the spots. The rest of the rotation was under construction late in spring training, a sign of how much things had changed from a year ago.

“We feel we have a competitive team,” Price said. “This isn’t a rebuilt situation. So we have to feel as confident as we can one-through-five in our rotation.”

The Reds lost 86 games last season in large part because of a subpar offense and a bullpen that finished as one of the NL’s worst. They’ve tried to fix those two problems in the offseason through trades and free agency.

Now, a lot of it is on the starters to make it hold together during a special season in Cincinnati, which will host the All-Star Game. Some things to watch:

Cueto is entering the final year on his deal. The Reds have talked to him about an extension, but nothing was imminent as spring training wound down. If Cueto doesn’t have an extension by midseason, the Reds would be in the position of considering a trade offer rather than letting him leave as a free agent after the season.

If Votto is back to form, the offense will get a huge boost. The question is whether he can make it through the season without getting hurt again.

“I think that I’ve proven when healthy that I’m a helpful part of the team,” Votto said.

The bullpen was one of the biggest problems in the second half of the season, contributing to the Reds’ collapse. They were only 1 1/2 games out in the NL Central at the All-Star break, but went 25-42 the rest of the way. The bullpen was 1-17 after the break.

Closer Aroldis Chapman was dependable, but the middle of the bullpen was a huge problem.

The Reds added Burke Badenhop and Kevin Gregg to try to help, and moved left-hander Tony Cingrani into a relief role during spring training.

OUT IN LEFT FIELD

Ryan Ludwick struggled in his return from a significant shoulder injury, and nobody else excelled in left field, either, making it the biggest weakness in the lineup. The Reds got Marlon Byrd in a trade with the Phillies, hoping to finally stabilize the position. The 14-year veteran knows there’s a lot at stake in how he performs.

“Yes, there is pressure and there should be,” Byrd said. “This is a team that wanted me. I’ve got to come in to fill that veteran role, the left field spot, and bring some pop to the lineup. I have to do what I’ve done the last two years. To do any less is just a failure on my part.”

Center fielder Billy Hamilton had an exceptional rookie season, stealing a club rookie-record 56 bases. He wore down as the season went along, batting only .200 with 18 steals in the second half. The 6-foot, 160-pound leadoff hitter lifted weights in the offseason, trying to get stronger so he doesn’t fade again.

“I’m not a power hitter, but I want to be stronger than last year,” Hamilton said.