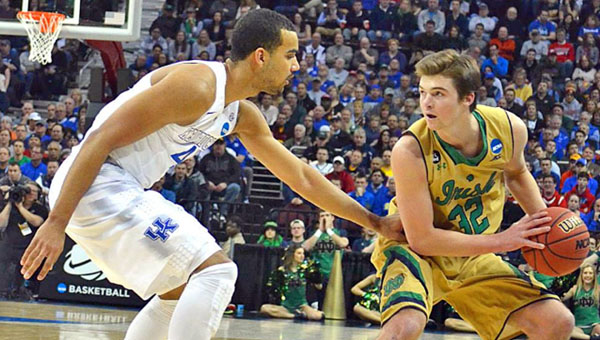 If you liked the look of last year’s Final Four, you will love the 2015 edition.

One game — Kentucky vs. Wisconsin — is not only a matchup of two No. 1 seeds, it’s a replay of last year’s semifinal won by Kentucky, 74-73.

It is the fifth time at least three No. 1 seeds reached the Final Four. The only top-seed sweep was in 2008.

This is the third straight year one conference has had two teams in the Final Four with Wisconsin and Michigan State coming from the Big Ten. The Southeastern Conference did it last year with Kentucky and Florida and the Big East had Louisville and Syracuse in 2013.

The end of the tournament will have plenty to watch, from Kentucky’s unbeaten streak to a matchup of some of the game’s top coaches. Here’s a peek at what to look for in Indianapolis:

MEETING AGAIN: No team has attracted the attention that Kentucky has. The Wildcats (38-0) are two wins away from becoming the first undefeated national champion since Indiana in 1976.

Kentucky survived its toughest test of the tournament in the regional semifinals with a 68-66 victory over Notre Dame that came down to the final possession.

“We figured out a way to win it. We’ve had other tests, but we have a will to win,” Wildcats coach John Calipari said.

Now they get to face Wisconsin, which like Kentucky, is making its second straight Final Four appearance.

Last year’s national semifinal came down to a big jumper by Aaron Harrison with 5.7 seconds left.

“That loss left a sour taste in our mouth, so we wanted to get back,” Wisconsin’s Sam Dekker said of the loss to Kentucky. “As a team we set some goals of what we wanted to do, and now we’re two games away from our last goal.”

COACHING ROYALTY: Tying UCLA’s Wooden puts Krzyzewski one appearance ahead of Dean Smith, who made 11 trips to the Final Four. Coach K is tied with Adolph Rupp for second in titles with four.

“I’m in this moment. I’ve been so lucky to be at Duke for 35 years and in the ACC, and the great players we’ve had and my past is not important right now,” Krzyzewski said.

“My present is incredibly important and just being with these kids and sharing this moment and this Final Four, I’m so happy. I’m so happy for them and to be with them. … I love my team. I love my team. They are a pleasure to be with, and as a result they’re taking me to Indy, which is kind of neat.”

All the coaches except Wisconsin’s Bo Ryan, who made his Final Four debut last year at age 66, have won a national championship. Michigan State’s Tom Izzo won it all in 2000, while John Calipari took the title with Kentucky in 2012.

SPARTY PARTY: Of the four teams headed to Indianapolis, only Michigan State didn’t have an impressive regular season. The Spartans had 11 losses, four more than the other three teams combined. They were 18th in the AP’s preseason poll and were out of the rankings for most of the season, getting back in the final poll at No. 23.

But relying on coach Tom Izzo’s trademark offensive rebounding and team defense, Michigan State made the improbable run to the Final Four.

“I’d like to tell you that I thought five different times this year that we were good enough to get to a Final Four, but I’d be lying to you,” Izzo said, adding this was the best of his seven regional final victories. The team didn’t want to be a group that didn’t make it, and that was a “battle cry” all year long, Izzo said.

UNBEATEN TEAMS: Kentucky is the first undefeated team to reach the Final Four since UNLV in 1991. The Runnin’ Rebels lost in the national semifinals to Duke, which went on to win the first of consecutive championships.

Indiana State was the last team to do it before UNLV, in 1979 when the Sycamores, led by Larry Bird, lost in the championship game to Michigan State and Magic Johnson.

Jim Walker jim.walker@irontontribune.com   PEDRO — There was no up and down for the South Point Lady Pointers. Just up.... read more