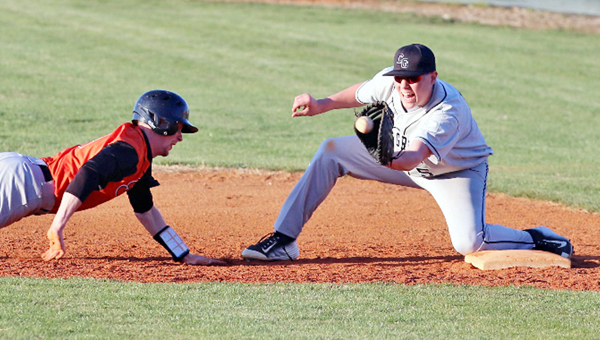 Coal Grove Hornets’ first baseman Jeb Jones (right) makes the catch on a pickoff throw attempt as he prepares to tag out a Raceland Rams’ baserunner. Coal Grove outlasted the Rams 16-15 on Wednesday. (Courtesy of Tim Gearhart of Tim’s News & Novelties of Ironton)

RACELAND, Ky. — Who said baseball was slow and boring?

Coal Grove built a big lead and then held off a late rally as the Hornets outlasted the Raceland Rams 16-15 on Wednesday.

Coal Grove took a 12-2 lead after four innings and led 16-8 lead into the seventh inning. The Rams scored seven times in the seventh but fell short.

“We were up 12-2 and had the game in hand, but we let them back in it,” said Hornets’ coach Dean Mader. “But to our guys credit, they kept their composure and got the win.”

The Hornets banged out 16 hits with Jesse Rigsby going 3-for-3 with a triple, Cole Gannon 3-4 with a double and Jacob Clark 3-5 with a triple.

After Raceland took a 2-0 lead in the first inning, the Hornets rallied to take the lead for good at 5-2 in the third inning.

The Hornets got six singles and two walks to score seven runs in the fourth inning as the lead went to 12-2.

Raceland scored three runs in the bottom of the fourth but the Hornets got a run in the top of the fifth when Paulus singled, stole second and third and came home on an error.

The Rams rally in these seventh was fueled by five walks, three singles and a double by Snyder.