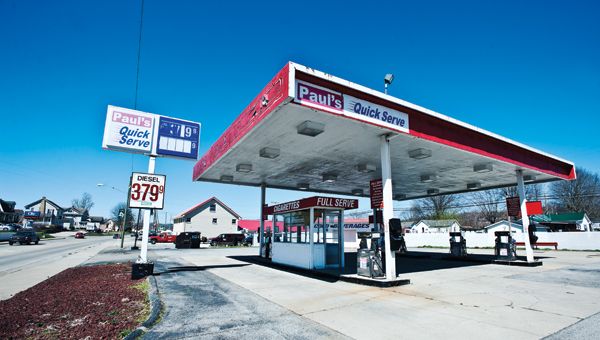 The former Paul’s Quick Serve sits vacant along State Route 7 in Proctorville as traffic passes by. This site was purchased by the LEDC, Lawrence Economic Development Corporation for commercial development.

PROCTORVILLE — Cleaning up a Proctorville service station to transform it into a viable site for commercial development is next for the Lawrence Economic Development Corporation.

Earlier this year the LEDC purchased and rehabilitated stations on Marion Pike in Coal Grove and Third Street in Ironton. Currently the LEDC is marketing those sites now.

“When you deal with dirty service stations, you don’t know what you are getting into,” Dr. Bill Dingus, executive director of the LEDC, said. “You have to assume the worst and hope for the best. People don’t realize it is not only an expensive task but a pretty challenging task.”

Bids will be put out for the rehabilitation; PetroEnvironmental of Cincinnati handled the work on the other two sites that took about two weeks for each location.

“They brought their lab on site and took out dirt and tested it,” Dingus said.

Before the site can be sold, an OK must come from the bureau of underground storage tank regulations.

“Our hope is to have the cleanup by midsummer to get the ground ready for marketing,” Dingus said. “It takes a while to get a client to pay what the property is worth when it is clean. As a dirty property, the real value is questionable. After you take the risk, it does have value with the guarantee that it is clean.”

Arrests made in school threat