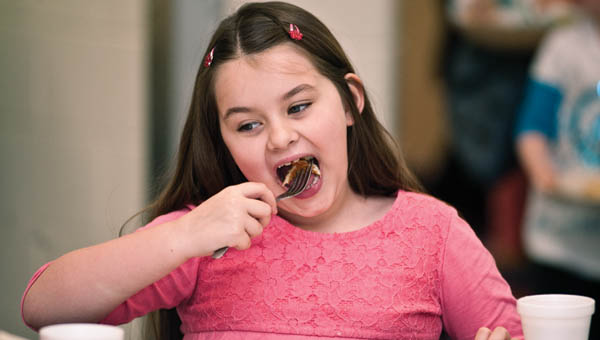 COAL GROVE — By 10:30 a.m. the crowd at the annual Coal Grove Lions Club pancake breakfast was coming at a steady stream into the cafeteria of Dawson-Bryant High School.

Sam Hall and Don Malone, club vice president, were manning the grills; Jon Ferguson was filling takeout orders and club president Tom Carey was playing host, going around to each table to make sure everyone was having a good time.

Menu on Saturday morning was pancakes, sausage, orange juice, coffee or milk with syrup and butter on the table being passed around generously.

Club members started the night before setting up tables, washing dishes and picking up the mammoth order that is part of the breakfast. That translates into 22 gallons of milk, four cases of pancake mix, three-dozen eggs, three cases of syrup, six cases of sausage and 15 packages of butter.

“We have a printout of what we buy each year and take that to the store a week before,” Carey said. “Then the day before, we pick it up and take it to the school.”

Doors opened at 7 a.m., but club members were there an hour earlier to start cooking.

Helping out this year were members of the Leo Club, the junior version of the Lions, and Scout Troop 103 from Deering.

All proceeds go to the eyeglass program of the Lions Club and sending Scouts to Camp Oyo in Scioto County.

“This makes you feel good,” Carey said. “We have a great organization.

It’s that time of year again, and although we are on the precipice of the tax filing deadline, that is... read more