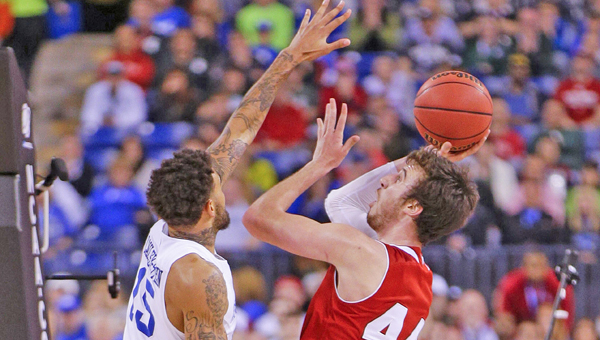 INDIANAPOLIS (AP) — Nobody ever said they were perfect. Now, the Kentucky Wildcats aren’t undefeated, either.

The hard-nosed Wisconsin Badgers did what nobody else could Saturday night — knocking off the Wildcats 71-64 behind 20 points and 11 rebounds from Frank Kaminsky and a clutch comeback down the stretch.

Now, it’s Wisconsin heading to the final to play Duke, an 81-61 winner over Michigan State in the earlier — and much less entertaining — semifinal.

“It gives us another 40 minutes, I know that,” said Wisconsin coach Bo Ryan, who leads the Badgers to their first final since 1941.

And Kentucky has a long ride home. The Wildcats close the season at 38-1 — two wins short of becoming the first undefeated team in college basketball since the 1975-76 Indiana Hoosiers. Instead, these NBA-ready group of Wildcats join the star-studded 1991 UNLV team as the latest to take an undefeated record into the Final Four but lose in the semifinals.

All easy pickins for the many detractors of John Calipari’s group of “One and Done” players, All-Americans and other future first-round and lottery picks.

There are other programs with talent, though.

Wisconsin has some future pros, and they came up big in the biggest game of their lives — a rematch of last year’s semifinals where the Wildcats won 74-73.

The Wildcats had the reputation as the team that never quits when things don’t look so good — a la last week’s win over Notre Dame — but Wisconsin came up clutch this time.

“They did to us what we’ve been doing to other teams all season,” Calipari said. “They executed down the stretch and we didn’t.”

Trailing by four and gasping for breath with their hands on their knees after going 6 minutes without a bucket, the Badgers (36-3) responded with an 8-0 run to take a lead Kentucky couldn’t overcome.

It started with a tough, twisting shot by a future NBAer, Sam Dekker (16 points), and kept going when Nigel Hayes tipped in an air ball after the shot clock had clearly turned to “0.” No violation was called, and in a game full of shaky officiating that left both coaches screaming, it generated momentum for the Badgers and left Kentucky flat.

Tied at 60, Andrew Harrison missed on Kentucky’s next possession. Then Dekker spotted up for a 3-pointer that gave Wisconsin the lead for good with 1:42 left.

Ahead 64-63 with 24 seconds left, Kaminsky, who was celebrating his 22nd birthday, hit two free throws. He and Bronson Koenig went 7 for 8 from the line over the last 24 seconds to seal the win.

Kentucky’s last, best chance came while trailing by three with 12 seconds left. But Karl-Anthony Towns received the ball in the post and got fouled. He made only one free throw, and from there, Wisconsin iced it from the line.