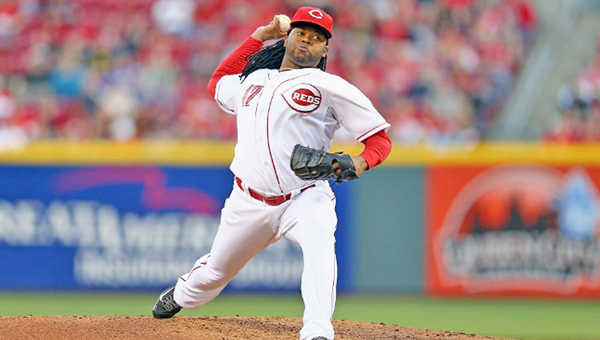 CINCINNATI (AP) Johnny Cueto will get his uncertain season started in the ballpark where he made a little Reds history with one swing last September. Made the Pirates sick at heart, too.

Cueto starts Cincinnati’s opener at Great American Ball Park on Monday, the scene of the Reds’ best moment in an otherwise drab and disappointing season. He closed out the regular season by getting his 20th win and knocking Pittsburgh out of the NL Central race.

Don’t think that either has forgotten.

For Cueto, it’s a chance to get his contract year off to a solid start and give the Reds a good moment early in the season. The Reds’ first 20-game winner since 1988 is a little uneasy as he gets set to try.

“You can’t be comfortable and say you can just do it again,” Cueto said. “Pitching is hard. It doesn’t always work out your way. I feel confident, but not comfortable.”

The Pirates? More determined than anything.

Pittsburgh has finished off each of the last two regular seasons at Great American Ball Park. The Pirates swept a three-game series in 2013 to win home-field advantage over the Reds for the wild-card game, then beat Cueto 6-2 at PNC Park before losing to St. Louis in the division series.

Last year, they needed to beat Cueto on the final day of the regular season to have a chance of winning the division. Instead, Cueto singled home the tiebreaking run in the eighth inning for a 4-1 win, leaving Pittsburgh consigned to the wild card. The Giants beat the Pirates 8-0 at PNC Park and went on to win the World Series.

In a sense, Cincinnati is an appropriate place for the Pirates to begin again.

“We’re not here to try to win a wild-card game,” Andrew McCutchen said. “We’re here to win the division and keep going from there to win a championship.”

Left-hander Francisco Liriano makes his second straight opening-day start for the Pirates, trying for a breakthrough. Liriano is 0-5 in nine career starts against the Reds with a 4.14 ERA. He’s struggled at Great American Ball Park, going 0-4 in five starts with a 5.47 ERA.

“This is a gifted pitcher,” manager Clint Hurdle said. “This is a guy we’re giving the ball to that we believe heavily in, that’s been an anchor in our rotation. When he’s been healthy, he’s been as good as anybody in the National League the last two years.”

Liriano was thrilled when he found out he’d get a chance to lead the rotation. He signed the most lucrative free-agent contract in franchise history last December, a three-year, $39 million deal that showed Pittsburgh is serious about remaining a contender.

“We’ve got a good rotation,” Liriano said. “It means a lot to me, to know they believe in me and want me to pitch the opener.”

The most significant change on the Pirates: He’ll be throwing to a different catcher. Russell Martin turned down the Pirates’ offer and signed a five-year, $82 million deal with Toronto. The Pirates got catcher Francisco Cervelli from the Yankees to replace him.

The opener also marks first baseman Joey Votto’s return to the Reds after missing most of last season with strained muscles above his left knee.

The Reds are hoping that a healthy Votto, combined with Marlon Byrd playing left field, will significantly upgrade an offense that struggled to score runs last season.

One of Cincinnati’s biggest questions involves Cueto, who can become a free agent after the season. He’d hoped for a new deal before the end of spring training, but enters the season unsure of what comes next.

“I can’t think about my contract or last year,” Cueto said. “I have to keep working. You have to think about one thing.”