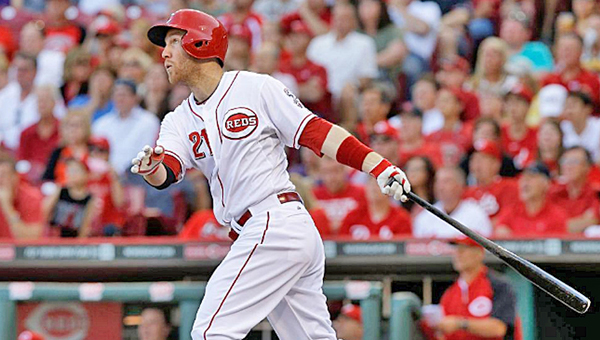 Cincinnati third baseman Todd Frazier hit a 3-run homer in the eighth inning to give the Reds a 5-2 win over the Pittsburgh Pirates to open the season on Monday. (MCT Direct)

CINCINNATI (AP) — Todd Frazier embraced the move up to the No. 3 spot in the Reds’ batting order, a sign they think he can drive in a lot of runs.

With one swing, he drove in three big ones in the season opener.

Frazier hit a three-run homer in the eighth inning, overcoming another stumble by the bullpen and rallying the åçReds to a 5-2 victory over the Pittsburgh Pirates on Monday.

Billy Hamilton and Joey Votto singled before Frazier connected on a down-the-middle fastball from Tony Watson (0-1), snapping a 2-2 tie.

“I was just looking for a sacrifice fly, but he threw the ball up,” Frazier said. “He got one out there a little bit. That was one of those no-doubters that come off the bat perfectly.

“That was huge. We talk about finishing games. I was the guy today. It will probably be somebody else next time.”

Until the eighth inning, Johnny Cueto was the guy.

Cueto, the Reds’ 20-game winner in the final year of his contract, opened his uncertain season with another dominating performance against the Pirates. He fanned 10 batters in seven innings before turning a 2-0 lead over to a bullpen that was a big problem last season.

“Everything was low,” Cueto said, with a trainer translating. “Everything went the way I wanted it to.”

Andrew McCutchen tied it with a two-run shot off newcomer Kevin Gregg. McCutchen has hit safely in his last 11 games at Great American Ball Park with five homers.

Jumbo Diaz (1-0) got the final out in the eighth for his first win. Aroldis Chapman fanned two of the three batters he faced for the save.

The Ohio River rivals have ended the last two seasons in Cincinnati with a lot at stake. The Pirates finished the 2013 regular season by sweeping a series and clinching home-field advantage for the wild-card game. Last year, Cueto beat the Pirates 4-1 for his 20th win, relegating Pittsburgh to another wild-card game.

It was the first time they opened a season together since 2003 in the inaugural game at Great American Ball Park. With the late homers, it had the feel of those September games.

Hamilton reached on a fielder’s choice in the third inning and took third base on Votto’s single, his first hit since July 4. Plate umpire John Hirschbeck called a balk on Liriano, making it 1-0.

Votto, the NL MVP in 2010, didn’t play after July 5 because of strained muscles above his left knee.

Bruce, who was limited after surgery for torn knee cartilage last season, homered in the fourth.

It was 68 degrees at the first pitch, but rain began falling only 18 minutes into the game. There was a 35-minute delay in the top of the sixth inning.

The former Nasty Boys bullpen of Norm Charlton, Rob Dibble and Randy Myers threw ceremonial first pitches. … The crowd of 43,633 was the largest for a regular-season game in Great American’s history. … Pittsburgh is 69-60 in season openers, including 19-10 against the Reds. Cincinnati is 67-71-1.

Cueto’s 10 strikeouts ran his career total to 1,005. The 10 Ks were his most in four opening day starts and two shy of his career high. He tied Mario Soto for second-most strikeouts on opening day by a Reds pitcher. Gary Nolan fanned 12 in 1969.

Pirates: The Pirates opened the season with five players on the disabled list, including starter Charlie Morton, who is recovering from hip surgery.

The teams have a day off. Gerrit Cole starts for Pittsburgh on Wednesday. He tied a career high by fanning 12 Reds at Great American in the final regular-season game last season. Cincinnati starts Mike Leake, who is 4-0 in his last eight starts against Pittsburgh with a 2.75 ERA. He hasn’t lost to Pittsburgh since May 5, 2012.

INDIANAPOLIS (AP) — With two of Duke’s star freshmen in foul trouble in the biggest game of the season, the... read more