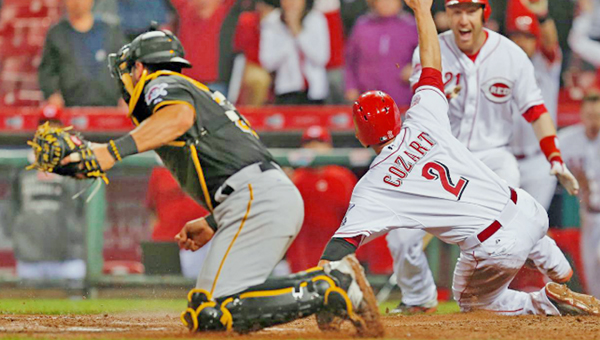 Cincinnati’s Zack Cozart (2) slides safely across home plate with the winning run in the 11th inning following a two-out single by Joey Votto as the Reds beat the Pittsburgh Pirates 5-4 on Wednesday. (Courtesy of the Cincinnati Reds.com)

Votto singled home the winning run in the 11th inning on Wednesday night, sending the Cincinnati Reds to a 5-4 victory over the Pittsburgh Pirates.

The four-hour game started after a long rain delay and ended at 1:46 a.m. local time.

Radhames Liz (0-1), the last reliever left for Pittsburgh, hit Zack Cozart in the back with one out in the 11th and walked Billy Hamilton to bring up Votto, who ended it with his second RBI single of the game.

“You have the all the confidence in the world with him,” Cozart said. “You almost expect him to get a hit.”

The first baseman didn’t play after July 5 last season because of strained muscles above his left knee, costing Cincinnati one of its key hitters. He’s helped them get off to a 2-0 start for the first time since 2011, when they won their first five games.

“You want to win anytime, but especially at home,” Votto said. “There’s too little time to put it in the rearview mirror.”

J.J. Hoover (1-0) allowed one single over the last two innings.

Corey Hart’s pinch-hit single off Burke Badenhop put the Pirates ahead 4-3 in the seventh, but Votto tied it in the bottom of the inning with a single for his first RBI of the season. Votto is 4 for 10 overall.

The Reds won the season opener on Monday 5-2 behind Todd Frazier’s three-run homer in the eighth, a game that included a 35-minute rain delay.

The start of Wednesday’s game was delayed by 2 hours, 34 minutes because of rain. Both starters struggled with their control after the long wait.

Gerrit Cole gave up three runs in five innings, including Frazier’s solo homer in his first at-bat. He also let in a run with a wild pitch.

Mike Leake allowed three runs in 5 2-3 innings, including RBI doubles by Pedro Alvarez and Francisco Cervelli. He walked six and also threw a wild pitch. The no-decision kept Leake’s streak intact: He hasn’t lost to the Pirates since May 5, 2012, going 5-0 in his past 14 starts.

Pirates third baseman Josh Harrison went 1 for 5 after signing a four-year, $27.3 million contract before the game. The deal includes a pair of club options that could push the total to $48.2 million.

So far, the Pirates and Reds have played 6 hours, 31 minutes of baseball and sat through 3 hours, 9 minutes of rain delays in their first two games.

Frazier is the first Reds player since Joe Randa in 2005 to homer in the first two games.

Pirates: RHP Charlie Morton threw on Monday without a problem. He’s on the DL recovering from surgery on his right hip last September. He’ll have at least one more throwing session before pitching in a simulated game.

Reds: RHP Homer Bailey had no problems after throwing 75 pitches at the Reds’ spring training complex in Arizona on Monday. He’s tentatively scheduled to make a rehab start for one of the minor league teams on April 12. Bailey is recovering from forearm surgery last September.

Pirates: A.J. Burnett makes his first start since returning to the Pirates. He spent last season with the Phillies. Burnett is 7-6 with a 3.71 ERA in 16 games against Cincinnati.

Reds: RHP Anthony DeSclafani makes his Reds debut and sixth major league start overall. The Reds got him from Miami in December as part of the trade for Mat Latos. He’s never faced the Pirates.