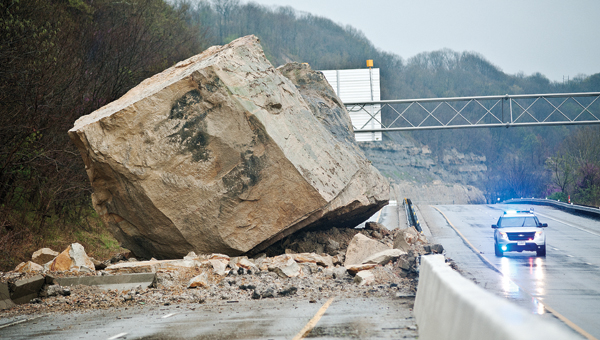 Massive boulder closes down U.S. 52 in both directions

SOUTH POINT – It came in a cloud of dust and then traffic stopped. At least for anyone wanting to get from South Point east to Ironton.

At 2:58 a.m. the Ohio State Highway Patrol got a call that a massive boulder had come down on U.S. 52 east of the Ashland-Coal Grove bridges.

“There was an individual who did not see it coming down but saw a cloud of rock and debris,” Kathleen Fuller, public information officer for District 9 of the Ohio Department of Transportation, said. “That was maybe the aftermath. He might have been the first to see it.”

As soon as the patrol was notified, ODOT crews were called in to shut down the roadway.

“Our geotechnical engineer will be there this morning,” Fuller said. “We hope to have the eastbound opened up by mid morning to late morning.”

Those lanes are filled with rock and debris which can be hauled away with a front end loader and plow.

Clearing out the actual boulder, however, could take up to two weeks.

“We will have an emergency contract and based on how we have done it in the past the contractors will have a couple of different options,” Fuller said.

It may require periodic blasting, then cutting those sections into manageable pieces that can be cleared away.

Until those lanes are cleared traffic will continue to be detoured into Kentucky and West Virginia.

Cincinnati second baseman Brandon Phillips slips and falls during the fourth inning of Thursday’s game, but he recovered and made... read more