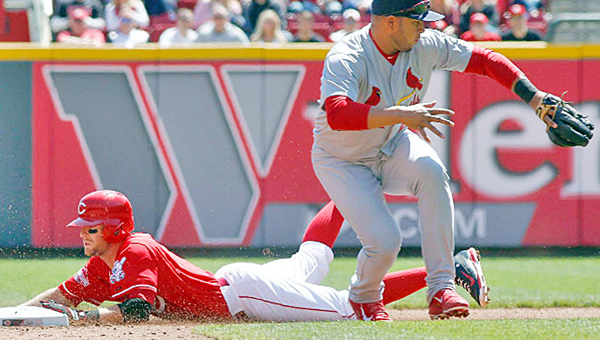 Cincinnati’s Zack Cozart slides safely into second base with a fifth inning double during Saturday’s game against the St. Louis Cardinals. Cozart had two hits but the Reds lost 4-1. (Courtesy of the Cincinnati Reds.com)

CINCINNATI (AP) — Johnny Cueto turned in another great start for the Cincinnati Reds, and the ace right-hander is still looking for his first win of the season.

Reds third baseman Todd Frazier homered on his bobblehead day, but he also committed an error that helped set up Kolten Wong’s sacrifice fly in the second. Adams led off the fourth with his first homer, and Jhonny Peralta and Yadier Molina each had a run-scoring single in the ninth.

Cueto (0-1) was charged with two runs, one earned, and four hits. He pitched seven shutout innings in the Reds’ 5-2 victory over Pittsburgh on opening day.

“Johnny pitched seven great innings,” manager Bryan Price said. “He had plenty left, but we didn’t have much going on offense so I had to hit for him.”

The Reds’ Nos. 4 through 7 batters were a combined 1 for 15. Cincinnati went 0 for 9 with runners in scoring position.

St. Louis right-hander Michael Wacha (1-0) allowed one run and five hits in 6 1-3 innings in his first game of the season. He stranded a runner in scoring position in each of his last four full innings.

Trevor Rosenthal, the Cardinals’ fifth relief pitcher, got five outs for his second save.

Adams led off the fourth inning by driving an 0-1 pitch 355 feet down the right-field line and onto the netting above the visitors’ bullpen. Adams’ seventh homer in 30 career games against Cincinnati lifted St. Louis to a 2-1 lead.

“I work to keep the ball down,” Cueto said. “I did except the one to Adams and he took it out. I was thinking of going eight innings.”

Frazier got Cincinnati off to a nice start before a sellout crowd of 41,525, connecting with two outs in the first for his third homer.

But the Cardinals loaded the bases with one out in the second, and Wong’s fly ball to right tied it at 1. Frazier’s miscue on Peralta’s sharp one-hopper was Cincinnati’s first error of the season.

Cardinals: OF Jon Jay returned to the starting lineup after getting Friday off.

Reds: Cuban RHP Raisel Iglesias is set to make his major league debut with a start on Sunday.

Saturday’s sellout crowd was Cincinnati’s second in five games. The Reds needed 23 games to get their second sellout last season.

The Reds challenged a call at first base. First base umpire Kerwin Danley ruled that Zack Cozart’s throw on a ground ball by Randall Grichuk pulled Joey Votto off the base. The call stood after a 2:02 delay. It was the first challenge by either team in the first five games.

“You never know what play will turn the game around,” Price said. “Everyone could tell he was out but I knew they wouldn’t have enough to overturn it. None of the camera angles were tight enough.”

The loss of a challenge prevented Price from requesting a review of a play at the plate in the ninth.