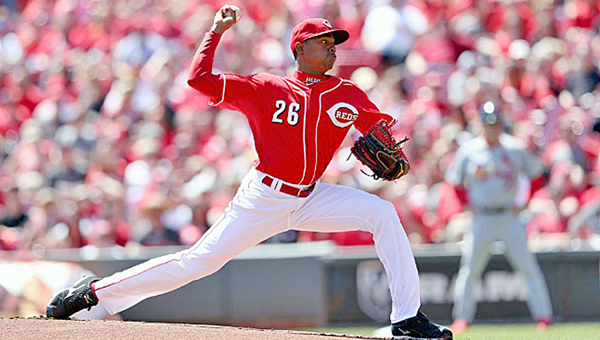 Cincinnati rookie pitcher Raisel Iglesias was impressive in his major league debut on Sunday, but the Reds still lost 7-5 to the St. Louis Cardinals in 11 innings. (Photo Courtesy of The Cincinnati Reds)

CINCINNATI (AP) — Raisel Iglesias will have to wait a little longer for his his first big league win.

Iglesias three runs and five hits in five innings in his major league debut for Cincinnati and didn’t get a decision in the Reds’ 7-5, 11-inning loss to the St. Louis Cardinals.

“Iglesias threw the ball good but got a little fatigued there,” Reds manager Bryan Price said.

Signed last July to a $27 million, seven-year contract, Iglesias became the first Reds player since Mike Leake in 2010 to reach the majors without playing a minor league game. Iglesias struck out four and walked two.

Price was ejected by crew chief Joe West in the eighth inning, upset the plate umpire Kerwin Danley did not signal that Jon Jay was hit by a pitch. Price did not want to use his challenge.

“Danley said he should have made the call and everyone assumed the call. I felt the umpires should have reviewed it since no one called it or the Cardinals should have used their challenge,” Price. “It may be sour grapes on my part.”

Carlos Villanueva (1-0) pitched two innings, working out of a bases-loaded jam in the 10th by striking out Todd Frazier. St. Louis took two of three in the series and has won 13 consecutive three-game series against Cincinnati, putting a damper on a homestand that opened with four consecutive wins.

“It was a game that was there to win and we didn’t get it done. You don’t win championships when you let games like this get away,” Price said. “It was a nice homestand, but today was a game we should have won. Since I’ve been here, the Cardinals has been a team that has beaten us. At the end of the World Series, no one cares how many times you beat a certain team. But to reverse that, yes, it’s important to me.”

Reds: Starting catcher Brayan Pena was taken out of the game after an awkward tumble at first while beating out bunt single in the Reds’ three-run seventh.

“I tried to hustle down to first. I have to work on my slide. What was I doing sliding into first?” Pena said. “I was excited when the doctor gave me good news. I will be all right.”

Cardinals: Adam Wainwright will pitch for the first time in eight days when he starts St. Louis’s home opener on Monday against Milwaukee. The right-hander’s second start of the season was pushed back by last Tuesday’s rainout in Chicago.

Reds: The Reds get their first look at under-renovation Wrigley Field when they open their first trip of the season on Monday in Chicago. Mike Leake is 4-0 with a 1.71 ERA in his last four starts against the Cubs.

Price was upset over Heyward’s slide in the fifth inning when he was thrown out at third trying to stretch a double.

“It was a dirty slide by Heyward. We didn’t like it,” Price said. “They aren’t a dirty team and don’t play like that, but we didn’t like the slide. Todd could have been hurt.”

The Cardinals successfully challenged a play at third in the eighth inning. With runners at first and second, Yadier Molina chopped a ball right at the plate. Catcher Devin Mesoraco reached to tag Molina, and Danley gave the safe call. Mesoraco threw to third, Frazier stepped on the bag and threw to first seemingly to compete a double play. Cardinals manager Mike Matheny challenged, saying there should have been a tag at third. The replay umpire determined the catcher tagged the runner on the leg, removing the force at third; the batter was called out, and runners were put on second and third with one out. Jmbo Diaz then retired the next two batters.

AUGUSTA, Ga. (AP) — Jordan Spieth tapped in his final putt to cap off a record performance and bent over... read more