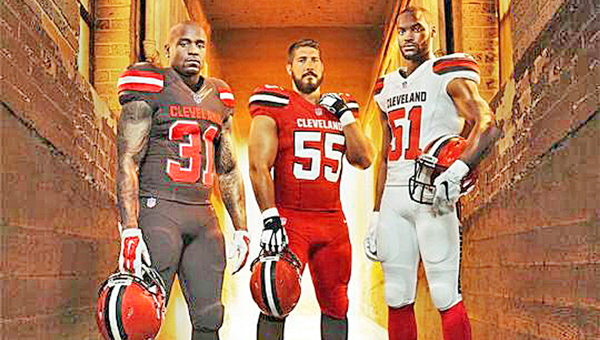 CLEVELAND (AP) — The Browns are the only NFL team without a logo on their helmets.

Now, they’re also the only ones with their nickname written down the sides of their pants.

Cleveland unveiled its new uniforms, featuring nine color combinations, on Tuesday night before thousands of fans who seemed to like the team’s new look following months of speculation and secrecy.

After nearly an hour of buildup during a program honoring the team’s past, nine current players walked onto the stage wearing large orange sideline jackets to hide the new, Nike-designed uniforms. When the orange, brown and white uniforms were finally revealed, Browns owners Jimmy and Dee Haslam smiled and 3,000 fans applauded with approval.

The uniforms include “BROWNS” written on the pants, and “CLEVELAND” emblazoned across the front of the jersey. Also, the words “Dawg Pound” — a nod to the team’s rowdy fans — are stitched on the inside of the jersey’s collar.

“I like having Cleveland on the front because that means everything to the team,” Pro Bowl tackle Joe Thomas said.

The Browns will be able to mix and match colors, allowing them to wear brown jerseys with brown pants, brown jerseys and orange pants and a traditional white and white combination — Cleveland’s most recognized look — among others.

“I don’t think I look good as a traffic cone,” he said. “I think I look better as all brown or all white or various combinations.”

“We could be like Oregon of the NFL,” Scheiner said before the uniform reveal, which included the players posing for photographs and doing interviews on an orange carpet.

Scheiner said the team consulted with fans during the long process to come up with the Browns’ new look. He said it was important to be true to the team’s rich history while also trying to look toward the future.

“We listened to our fans, and with respect to the logo and the uniforms, we kind of got permission from our fans on how far we can go,” he said. “It’s a nice combination of a link to our history and then kind of moving the team forward and matching the city’s transformation.”

“The fans will tell us,” he said. “We know that. We’ve learned that for good or for bad. We’re hopeful. We’re always hopeful. We work with good people and for the most part the fans dictated what these uniforms would look like. It was important to them that we still have a link to our tradition but matched the vibrancy of the city, and I think we did that.”

“I went to LSU, it was traditional,” Mingo said. “I came to the Browns, traditional. But the changes that they made here, I think you see the tradition in the jersey, but it’s new and it’s different. I think different is sometimes good.”

The Browns spent two seasons on the redesign of their old uniforms, which some fans considered bland while Browns traditionalists felt were a link to the franchise’s glory days.

The team was hoping for a more positive response than they received when they updated their orange helmet and logo. The Browns were panned for the helmet makeover, which was little more than the team using a bolder shade of orange.

“I don’t want to say it’s a mind thing,” he said. “But in this age, when players look good, they play good.”