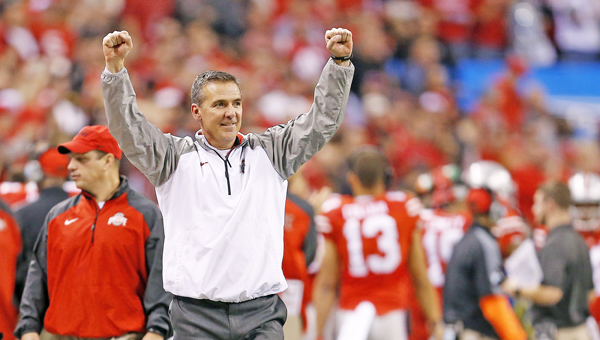 Ohio State Buckeyes’ head coach Urban Meyer will get a chance to see his team in action for the first time since the national championship game during Saturday’s annual spring game. (Sam Riche/TNS)

The Big Ten’s reputation as an underachieving football conference is so 2014.

The pundits are talking up the league this spring, largely because of the achievements and trends in the East Division. There was Ohio State’s national championship under Urban Meyer, Michigan State’s bowl win over a Baylor team that narrowly missed the College Football Playoff, the start of James Franklin’s rebuilding job at Penn State and, of course, Jim Harbaugh’s hiring at Michigan.

“Our side of the conference is kind of ridiculous right now with the quality of teams,” Meyer said Thursday.

Last year there was a huge gap in the East after Ohio State and Michigan State, which finished three games ahead of third-place Maryland. A big question is how much progress Michigan, which tied for fourth and was 5-7 overall, can make in Harbaugh’s first season.

On paper, Ohio State and Michigan State figure to be the dominant teams in the East again. The Buckeyes likely will be No. 1 in the nation in the preseason polls, too.

Though everyone else is in catch-up mode, the vibe has changed in the Big Ten.

“There’s a lot of pressure on the Big Ten to keep it rolling,” Meyer said, “because it certainly did help change the perception.”

What we know: The Buckeyes’ embarrassment of riches begins at QB. J.T. Barrett and Cardale Jones are practicing this spring, and Braxton Miller will return in August. The offensive line is stacked, and there’s plenty of talent everywhere else, too.

What we don’t know: Who will take over at defensive tackle for Michael Bennett, and who will line up opposite of Big Ten defensive player of the year Joey Bosa at end?

Coach Urban Meyer says: “I’ve been in situations where complacency and entitlement does start to seep into the program. I have not seen it. You always worry about that.”

What we know: The offense is in good hands with third-year starting QB Connor Cook, and Shilique Calhoun is back to lead what should be another formidable defense even without coordinator Pat Narduzzi, now head coach at Pitt.

What we don’t know: Who will take over at RB for Jeremy Langford, who will be Cook’s go-to receivers, and whether there is another elite CB in the pipeline after the loss of Trae Waynes.

What we know: QB Caleb Rowe will be the starter even though he missed spring with a torn ACL, and WR Marcus Leak is ready to emerge.

What we don’t know: Will the switch from the 3-4 to 4-3 defense produce the desired results, and can the addition of redshirt freshmen Derwin Gray and Damian Prince improve the offensive line?

Coach Randy Edsall says: “The thing I feel good about is we come out of the spring on both sides of the ball with a great understanding, and we went out and executed things we want to do in the fall.”

What we know: New offensive coordinator Ben McDaniels’ first job is to sort out the QB competition among Chris Laviano and LSU transfer Hayden Rettig, and the Knights need RB Paul James to be 100 percent after tearing his ACL last season.

What we don’t know: Can the Knights carry over the momentum from winning three of their last four games, and will Miami transfer S Kiy Hester live up to his accolades?

Coach Kyle Flood says: “We have quite a few positions where we’ll have new starters. We’ve made a lot of progress toward filling those jobs. Ultimately, we won’t fill them for certain until the fall.”

What we know: QB Shane Morris comes out of the spring as the starter but will be pushed by Iowa transfer Jake Rudock. The defense should be better even though star LB Jake Ryan is gone.

What we don’t know: Will redshirt freshman Moe Ways produce enough to make up for the loss of WR Devin Funchess, will an offensive line that returns all of its starters improve and will someone emerge as a big-time pass rusher?

Coach Jim Harbaugh says: “I expect (Rudock) to be very good competition. He’s an experienced player who is hungry to compete … for a role. Whether it’s a starting role, I know that’s where his goals are aligned. I’m excited to watch it go down.”

What we know: The Nittany Lions run at least two-deep with scholarship players at most positions thanks to the easing of NCAA sanctions, QB Christian Hackenberg will be a third-year starter.

What we don’t know: Is RB Akeel Lynch ready to be the primary ball carrier, can a dependable kicker be found to replace Sam Ficken and how deeply will star LB Mike Hull’s departure be felt?

Coach James Franklin says: “The fact we returned our entire staff was really valuable. It’s been really helpful in terms of building on the foundation we laid last year.”

What we know: QB Nate Sudfeld returns after a season-ending shoulder surgery, but the offense probably won’t produce enough to make up for a defense that gave up 434 yards and 33 points a game.

What we don’t know: Transfer RB Jordan Howard ran for almost 1,600 yards for UAB last season, but can he have the same success in the Big Ten after the Hoosiers lost Tevin Coleman?

Coach Kevin Wilson says: “The way we battled the last four games showed me that the players are buying in. This is by far the best we’ve been.”