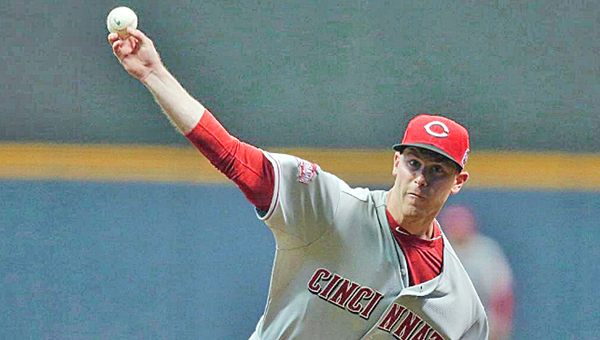 Cincinnati starting pitcher Anthony DeSclafani went eight shutout innings of two-hit baseball as the Reds beat the Milwaukee Brewers 6-1 on Monday. DeSclafani is now 2-0 on the season. (Photo Courtesy of The Cincinnati Reds)

Acquired by the Cincinnati Reds in a December trade with Miami for pitcher Mat Latos, DeSclafani (2-0) tossed eight shutout innings in a 6-1 victory over the Milwaukee Brewers on Monday night. DeSclafani limited Milwaukee to two hits and ran his scoreless innings streak to 15.

“I’ve felt really comfortable with this team from Day One,” said DeSclafani, who held Milwaukee hitless until Adam Lind’s double with two outs in the fourth.

It was the third straight strong outing for DeSclafani. In his previous outing last Tuesday, he held Chicago to two hits in seven scoreless innings.

“He was locked in,” Reds manager Bryan Price said.

Price described the 25-year-old DeSclafani as “an inherently confident guy” despite his lack of major league experience.

“This is what we heard about when we were in the trade discussions with Miami but no one can expect anybody to come out and throw as well as he has,” Price said.

“The key today was he was ahead in the count,” Pena said.

“He continued to attack the strike zone.”

DeSclafani and Milwaukee starter Wily Peralta (0-2) were locked in a scoreless battle through five innings. The Reds got to Peralta in the sixth. Pena drove in the game’s first run with a sacrifice fly and Zach Cozart followed with a three-run homer.

“(Peralta) got a little wild and he left one over the plate to me,” Cozart said.

Joey Votto added a two-run homer in the seventh off Peralta, who allowed six runs over seven innings.

“It’s hard to believe with the stuff he had today that he ends up with six runs against him,” Milwaukee manager Ron Roenicke said.

Ryan Braun homered with one out in the ninth for the Brewers.

Milwaukee had runners on first and second and one out in the fifth when Pena made a diving catch of Peralta’s popped up, two-strike bunt attempt. Pena threw to first for an easy double play. “I was just trying to execute a pitch and trying to get Peralta to jab at a pitch. Pena made a great catch. He’s a heck of an athlete,” DeSclafani said.

Cincinnati appeared to score in the second when Pena slid into home and was ruled safe on DeSclafani’s single. Umpires overturned the call after a Milwaukee challenge, costing the Cincinnati pitcher an RBI. “It would have been nice but it’s all right. I’ll take a win for the team instead,” DeSclafani said.

Reds: C Devin Mesoraco remained away from the team for an undisclosed family issue. He is expected to return Tuesday, Price said. Mesoraco hasn’t played since April 12 due to a left hip impingement. … Desclafini was hit in the calf in the fourth inning but remained in the game.

Brewers: C Jonathan Lucroy left the game in the seventh after a foul tip hit his left foot. The Brewers placed Lucroy on the DL immediately after the game with a fractured toe. . 2B Scooter Gennett sat out after receiving five stitches to close a wound to a knuckle on his left hand that he suffered in the shower after Sunday afternoon’s game in Pittsburgh. Gennett said he sliced open the knuckle on a metal shower rack. “It was definitely a freakish thing. It started bleeding everywhere.” Gennett said he hopes to return to the lineup by Wednesday. Roenicke, however, didn’t rule out a DL stint for Gennett.

Reds: Jason Marquis (0-1, 6.30) takes the mound in the second of the three-game set on Tuesday. The veteran hurler will make his 22nd career start against the Brewers. He’s 6-12 against Milwaukee.

Price lashes out at media in profanity-filled rant