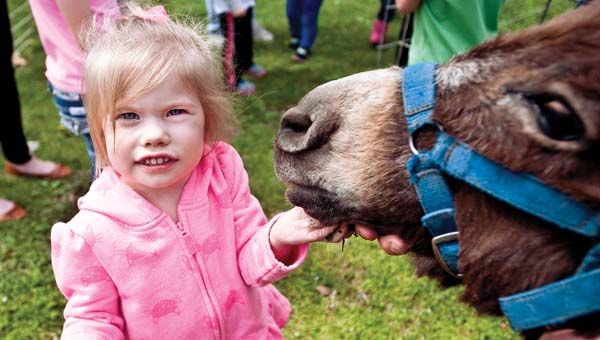 Finley Clyse feeds Philip the burro on Thursday at St. Lawrence Elementary School. Children were given an opportunity to visit farm animals as part of Week of the Young Child.

Grace Cade took a hold of the hand of her friend, Rhylinn Meeks, to lead her into the makeshift pen on the playground at St. Lawrence School on Thursday to see up close a baby lamb.

As the lamb, naturally enough called Baby, was wondering why she was there, Grace gave Rhylinn a remedial in farm animals.

Next to Baby in another pen was a calf, not yet with a name, and next to that one was Phillip, the burro.

The animals showed up at St. Lawrence thanks to Grace’s father, county engineer Doug Cade, who brought them via a trailer from his family’s farm in Waterloo.

Philip may be 19 years old but that is a child in a donkey’s lifetime since they can live up to between 60 and 80 years old.

“Do you see that cross on his back,” Cade asked the children. “That means he is a Jesus donkey. That’s the donkey Jesus rode into Jerusalem.”

Philip has only been at the Cade farm since Christmas but already has a role assigned to him.

“He protects the herd and keeps the coyotes out,” Cade said.

The animals came to the school for farm day, which was part of the Week of the Young Child.

“A lot of the kids don’t get to see farm animals,” Chris Monte, assistant principal said.

Work to begin on slip

CHESAPEAKE— A permanent fix for a weekend landslip at the 1-mile marker on County Road 32 will be put on... read more