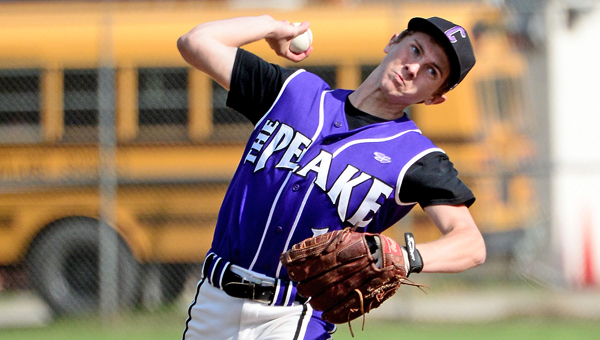 CHESAPEAKE — Jacob Henson was in the zone. The strike zone, that is.

Henson racked up 14 strikeouts as he pitched a one-hitter to give the Chesapeake Panthers a 5-0 Ohio Valley Conference win over the South Point Pointers on Tuesday.

Henson had a no-hitter with two outs in the seventh inning before a soft single fell in front of a diving centerfielder for the Pointers’ lone hit.

Logan Wade had a shutout for the Pointers until Chesapeake (5-3, 5-0) scored all its runs in the fifth inning.

Bobby Arthur and Kobe McWhorter walked and Kolton Webb reached on a fielder’s choice to load the bases.

Casey McComas hit a sacrifice fly for a 1-0 lead. After a passed ball, Henson delivered a two-run single.

Blake Lester walked and Dakota Blankenship grounded out as a run scored. Nate Smith then doubled to drive in the final run.

Chesapeake plays at Fairland on Thursday.

Jim Walker jim.walker@irontontribune.com   PORTSMOUTH — This Diamond was quite a jewel. Luke Diamond pitched an eight-hitter as the Ironton... read more