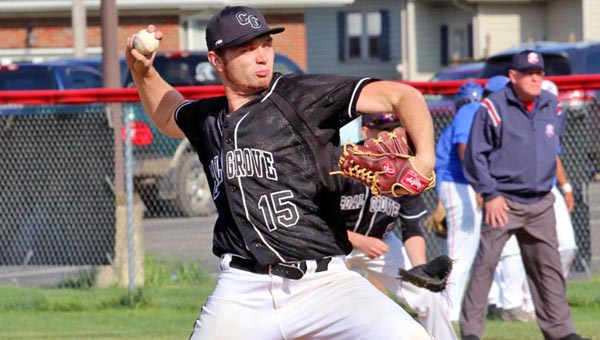 COAL GROVE — The ugly duckling grew into a swan.

After starting the game with a bunch of errors, the Coal Grove Hornets regrouped and beat the Portsmouth Trojans 6-4 on Wednesday in an Ohio Valley Conference game.

“We started off ugly, but we pulled it together Pierce kept his composure, kept battling and kept pitching. We played hard the whole game

Jacob Pierce got the win as he pitched a five-hitter. He struck out three and walked one.

Portsmouth took a 2-0 lead in the first when Ryan Williams and Zach Delotell both reached on an error and they scored when Dylan Mullins reached on another error.

Coal Grove got a run in the second when Pierce singled, moved up on a passed ball, Paulus singled him to third and Pierce scored when Paulus stole second.

The Trojans (5-7) got the run back in the third. Sky Oliver singled, stole second and scored on Hunter Gibson’s base hit.

Coal Grove tied the game in the fourth.

Pierce doubled with one out, Paulus walked and Cole Gannon singled to load the bases. Jones and Malone both walked to force in runs and Clark had an RBI single.

The Trojans got a run in the sixth when Austin Mullins singled, stole second and third and came home on a passed ball.

Jim Walker jim.walker@irontontribune.com   PROCTORVILLE — This was a definition of the game of baseball. In a game that went... read more