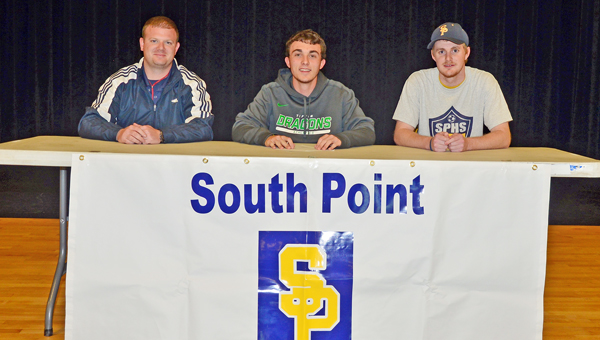 SOUTH POINT — Trey Kearns plans to help defend his country. But first he plans to defend his team’s goal.

The combination of soccer and his field of study led him to sign a letter-of-intent with the Tiffin University Dragons on Thursday.

“It’s a smaller campus. I like the student-teacher ratio, and they have my field I want to go into,” said Kearns. “(His major) has a lot of good job opportunities in the future.”

“I’m really expecting (to play) anything from midfield to defender. I don’t know what they’re expecting of me. They just want me to come up and start a new role.”

Kearns’ list of interest included Tiffin, Marshall and Findlay – a nearby Tiffin rival. But he admits that Tiffin was the odds-on favorite early in the process.

South Point coach Zane Joy said Kearns has developed into a consummate player during his four-year career with the Pointers.

“Trey even as a freshman started right from the gate. He’s proven to be a very hard worker and very skilled as well,” said Joy.

“His freshman year he started right midfielder and a little defense as well. Once graduation. His junior and senior years he incorporated a more nucleus-type role which is center midfielder and forward as well. He’s a tremendous player, very good skill and footwork.”

He helped the Pointers establish a school record with 16 wins last season as they went 16-2 and reached the district semifinals.

Kearns is proud to be part of the program’s recent success.

“I’ve had real fun a couple of years ago. I played with Michael Lien. That was probably my favorite thing to do,” said Kearns. “My friends — the seniors — I’ve grown up with and played with through little league have made progress, too. It’s beena real joy to play with them.”

Kearns — who also plays baseball — has already begun his preparations for the next level.

“I’ve been on a regiment for about two months now. I’ve been in the weight room. I’ve been running a lot. Between baseball (and workouts), I’ve been mostly doing what he’s given me and top that with baseball. It’s been kind of difficult,” said Kearns.

Joy is confident Kearns will play at Tiffin.

“His skill will be fine. He needs to get bigger like any senior. He’ll be fine,” said Joy.

Bailey bouncing back but bullpen breaks down