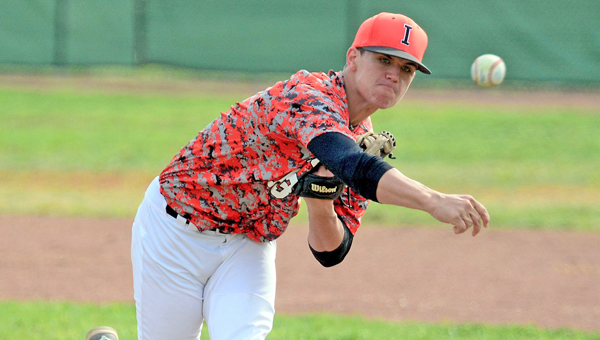 SOUTH POINT — Ironton coach Larry Goodwin liked seeing a win, but he liked some other things he saw.

Goodwin liked how his team responded to an early deficit and the pitching of Garrett Carrico as the Fighting Tigers beat the South Point Pointers 7-3 on Friday in an Ohio Valley Conference game.

“The players showed a lot of character tonight. We were down 3-0 at one point. We kept our composure and got some base runners on and then had some timely hits,” said Goodwin.

Not only did Ironton get a comeback victory, but it also marked the first career win for the freshman Carrico.

Travis Dillon was 2-3 to lead the Pointers.

South Point took a 1-0 lead in the first inning when Trey Kearns singled, stole second and third, and scored on Alex Whitt’s ground out.

The Pointers extended the lead to 3-0 in the third inning.

Kearns walked, stole second and third, and came home on a sacrifice fly by Chris Woodard.

Whitt then doubled and scored on Dillon’s base hit.

But Ironton answered with four runs in the fourth.

Diamond singled, Carrico walked and Kelley singled for an RBI. Klaiber singled home Carrico and Bruce singled to load the bases. Price then doubled in a pair of runs to cap the rally and give the Fighting Tigers the lead.

Ironton added a run in the fifth when Kelley reached on an error and Klaiber doubled.

The Fighting Tigers added a pair of insurance runs in the sixth.

Bruce reached second on a two-base error, went to third on a ground out, Wilson walked and both runners scored on a hit-and-run single by Diamond.