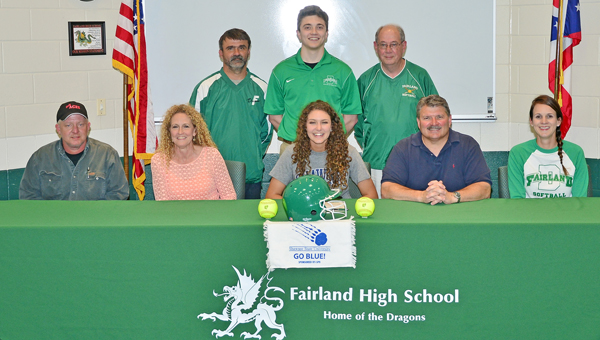 PROCTORVILLE — Softball and basketball have gone hand-in-hand with Mackenzie Riley, but she knew that there would come a day when it would be one or the other.

That day came Friday when the Fairland Lady Dragons’ senior picked “the one” and signed a letter-of-intent to play softball at Shawnee State University.

“Softball was the first one. I’ve been playing travel softball since I was younger and it’s always been number one. It’s not that I don’t love basketball, it’s just softball has always been that one for me,” said Riley.

As a member of the basketball team, Riley was a three-year starter and played in the Division III state tournament the past two years.

Although it was a thrill, she said having to juggle two sports was a learning experience.

“Most definitely. It made me really work hard on another sport in the off-season and kept me in shape. It taught me how to balance things,” said Riley.

“I know what it’s like to play on a big stage or a small stage. You’ve just got to play your hardest no matter where you’re at.”

Going deep in the tournament took away some of Riley’s preseason preparation time for softball.

Despite the late start, Riley is hitting .342 with a home run and a team-leading 12 runs batted in plus five doubles.

As a junior, Riley suffered a broken finger and played in just 13 games. She still hit .350 with two home runs and three doubles.

“When I went (to Shawnee) to work out I did pretty good hitting and I think that’s what attracted them,” Riley said. “I would be thrilled to go down there and play right away.”

Fairland head coach Mindy Clark said Riley’s work ethic has been a key to her success.

But there is more to Riley than just hard work. Clark said Riley has the skill set to play at the next level.

“Not only is she smart in the classroom, she has great knowledge for softball. She knows the game. She has great quickness. A lot of coaches compliment her on how good she is at defense, but she also hits the ball really well. I’ve been really proud to be able to coach her. I can’t wait to see what she does at the next level,” said Clark.

Riley has played shortstop for Fairland but she worked out in the outfield for Shawnee State and plays mostly outfield and some shortstop for her summer travel team.

“I don’t care where I play. I just love playing the game. It’s not about where I’m at. No matter where they put me I’ll be happy,” said Riley.

Clark said Riley plays shortstop for the Lady Dragons out of necessity and plays well, but she admitted that Riley has all the tools to play in the outfield.

“She has a great arm and catches extremely well. She is a great outfield,” said Clark.

Riley had inquiries from various schools but eventually she picked Shawnee State over Kentucky Christian University due mainly to her field of study choice.

“It’s close but I still get that college experience. I like the thought of being close to home. I can come back and see my family and my friends. I feel like it’s perfect for me,” said Riley.

Mackenzie is the daughter of Jo Anna and Todd Riley.