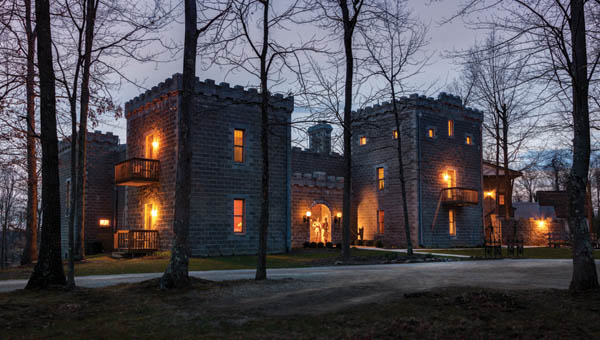 The creators of Ravenwood Castle were Sue and Jim Maxwell, who owned and operated the property for nearly 17 years. Lifelong Anglophiles, the Maxwells imbued Ravenwood with the English charm they experienced on their many travels throughout the British Isles.

Ravenwood Castle is a relaxing retreat in the woods

Nestled in the woods of scenic Hocking Hills, Ravenwood Castle provides a charming setting with a medieval flair, offering a respite from the monotony oftentimes created by the routine of daily life.

Whether planning a romantic trip for two or a unique getaway for family and friends, Ravenwood Castle makes for an unforgettable destination for the gregarious.

Operating as a bed and breakfast and country inn, Ravenwood Castle is open year-round.

Cleveland-area natives Jim and Pam Reed purchased Ravenwood Castle in June 2012. The Reeds first visited Ravenwood in 1996, and returned numerous times in the years since. When they discovered Ravenwood was for sale in early 2012, they knew they wanted to write the next chapter in its story.

“Jim is the former chief operating officer of a law firm and I was a real estate agent turned stay-at-home mom,” Pam said. “We both have quite a bit of experience in the business world. It’s really something to think we now own a place we first fell in love with as guests.”

Jim utilizes his business experience to manage the operations of the castle. Pam’s focus is on guest relations and planning Ravenwood’s myriad of events.

“It’s going really well so far,” Pam said. “We found out the castle has lots of loyal guests just as we used to be. It’s the kind of place where loyal guests become like family; our kids are friends with the kids of the guests who stay there often.”

The design of Ravenwood Castle was inspired by castles built to defend the border between England and Wales in the 12th and 13th centuries. The building is much newer, of course.

Ground was broken in September 1994 and the main castle building was finished by May 1995. Although the original plan only called for four guest rooms, more rooms were added along the way. The cottages in the medieval village were started in the fall of 1996 and the first three were ready for guests in the spring of 1997.

“People who like to tent camp love our Gypsy Wagons,” Pam said. “They are a step up from a tent and include a fan, heat and a refrigerator. They are not air-conditioned and are unavailable for rent November through May because of the cold weather.”

Ravenwood Castle also offers a variety of dining options and breakfast is included with all room rentals. Described as “good, old fashioned home cooked meals,” food is available in the Great Hall and Raven’s Roost Pub. Dinners are available to the public as well.

“We pride ourselves on carrying the finest craft beers,” Pam said. “The menu changes frequently so guests have to stop in to see what we have.”

The Raven’s Roost Pub also offers a relaxing atmosphere for a post-Hocking Hills Hike drink by a fire, chatting with friends or playing board games.

“We carry a selection of beer, fine wines, ciders and mixed drinks,” Pam said. “We also offer a limited menu of pub fare such as our beer and cheddar soup and the popular Excaliburger.”

Ravenwood also hosts several events throughout the year, such as beer and wine tasting weekends, gaming groups and murder mysteries.

With the goal of helping guests leave the hustle and bustle of daily life behind and providing an environment where guests can enjoy time with family and friends, sitting around a table with a game is a great way to spend that quality time. Whether you are a board gamer or role player, have an existing group or are on your own, Ravenwood Castle has you covered.

“So many people get caught up in the day-to-day routines of their lives and Ravenwood is all about getting away, unplugging, relaxing and reconnecting with loved ones,” Pam said. “We loved it so much when we were guests we wanted to purchase the property. It’s a place for people to call a second home.”

Unplugging is not only recommended at Ravenwood, it is necessary since its remote location makes Wi-Fi unavailable.

“We have had people tell us they were concerned about not having Wi-Fi when they first checked in,” Pam said. “By the time they leave they tell us how wonderful it was unplugging and that they can’t wait to do it again.”

Some rooms have been refurbished and some are in the process of being refurbished, which is something Pam said was one of her and Jim’s goals.

It’s been a lot of hard work and it’s been rewarding to see where it was when we bought it and where it is now,” Pam said. “It is definitely a full-time job.”

The creators of Ravenwood Castle were Sue and Jim Maxwell, who owned and operated the property for nearly 17 years. Lifelong Anglophiles, the Maxwells imbued Ravenwood with the English charm they experienced on their many travels throughout the British Isles.

Sitting on a knoll over looking Ritter Park in Huntington, W.Va., is the home of Grant and Tracy Shy. Sitting... read more