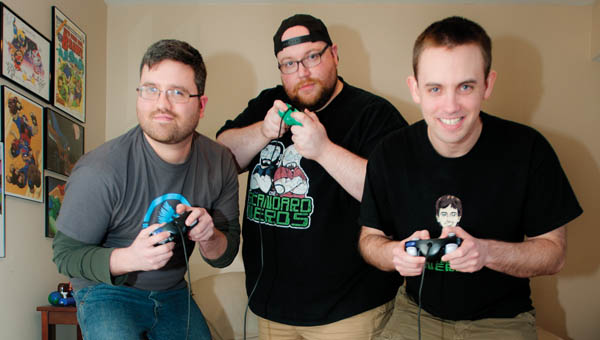 This year’s Extra Life event will be on Nov. 7 and the Nerds have already set up their online donation site, Extra-life.org/team/thestandardnerds2015. The goal is $3,000.

Since 2008, more than $14 million has been raised for Children’s Miracle Network hospitals around the country in a way that may seem a bit unconventional to some.

And it all started with a girl named Victoria Enmon and a charity effort called Extra Life.

Extra Life was launched in 2008 by the owners of Sarcastic Gamer, an independent video game blog and community site. The effort was in response to Tori’s death earlier that year from acute lymphoblastic leukemia. She had played video games to keep her spirits up while hospitalized.

Extra Life continued to grow and last year, the event raised more than $6 million and thousands of people participated, either through gaming, donating or spreading awareness.

Some of that money came from right here in the Tri-State.

Brice Barnett and Adam Kipp, of South Point, and John Linkous and Derek Rowe, known on YouTube as the Standard Nerds, began raising money this past spring for the Cincinnati Children’s Hospital and their first Extra Life challenge.

“We grew up with gaming and we were kids when we started playing games,” Barnett said. “All you have to do is go to any children’s hospital either physically or online and read some of the stories.

“I enjoyed my childhood. I could go outside or hang out with friends and do whatever I wanted to do. These kids can’t do that. If any money we raise can help them at least have a semi-normal childhood, why not?”

Rowe agreed, saying it was an easy choice to join in the marathon.

“I was able to do something I love to help people in need,” he said. “When Brice and Adam explained what we were going to do, the choice was easy.”

The group and some of their gamer friends set a modest goal of $1,000, which they soon surpassed by selling and raffling off comics and collectables at last year’s Tri-State Comic Con in Huntington.

During Extra Life, Kipp, Barnett, Rowe, Linkous and many of their friends played video and board games for 24 straight hours. Actually, they went about an hour over the mark thanks to a $50 donation.

“We were beating the Simpsons arcade game and we hit the 24-hour mark and the game wasn’t over yet,” Kipp said. “One of our friends donated $50 for us to finish the game.”

By the time Extra Life was over, the Nerds had raised more than $2,500.

“When we first set out to do it, we set out to raise $1,000,” Kipp said. “We thought, if we could get to that, we would be amazed. The support we got from everyone donating stuff, people coming over and joining us during the stream and helping us out at the conventions and getting us set up at the conventions, and just helping us spread the word about what we were doing, it was just awesome to see.”

This year’s Extra Life event will be on Nov. 7 and the Nerds have already set up their online donation site, Extra-life.org/team/thestandardnerds2015. The goal is $3,000.

The group is also a sponsor of this year’s Tri-State Comic Con and will have another booth set up to raise money to add to their fund.

“The first year was awesome,” Kipp said. “We had a ton of support and we want to do it better.”

The creators of Ravenwood Castle were Sue and Jim Maxwell, who owned and operated the property for nearly 17 years.... read more