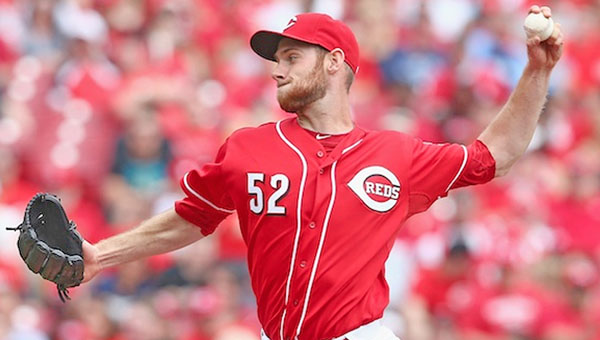 Cincinnati’s Tony Cingrani pitched well in relief but the Reds lost 5-2 on Sunday as the Chicago Cubs swept the abbreviated two-game series. (Photo Courtesy of The Cincinnati Reds)

CINCINNATI (AP) — The latest version of the Reds is looking much like that past few editions. If the bullpen isn’t struggling, the offense is wasting chances.

The Reds lost their third in a row on Sunday, 5-2 to the Chicago Cubs. They wound up swept in the rain-shortened, two-game series because the bullpen was shaky and the offense couldn’t take advantage of opportunities.

Cincinnati went 0 for 20 with runners in scoring position during the two games against Chicago, looking much like the lineup that was among the league’s least-productive last season.

“It’s not where we want to be offensively,” manager Bryan Price said. “We create opportunities. We just can’t cash in. We’ve got to get better at it.”

Rookie Addison Russell doubled with the bases loaded in the fourth inning off Anthony DeSclafani (2-1) to break the game open. Miguel Montero had a solo homer and a run-scoring single off DeSclafani, who had a streak of 16 scoreless innings snapped.

“I was missing too much over the plate,” DeSclafani said. “I didn’t have a really effective slider.”

Jake Arrieta (3-1) pitched six innings after waiting out a 4-hour, 13-minute delay before the Reds called off Saturday’s game because of persistent rain. The Cubs won the series opener on Friday night, 7-3 in 11 innings.

Arrieta gave up four hits, including Todd Frazier’s solo homer, and struck out six. Hector Rondon gave up a hit in the ninth and earned his fourth save in five chances.

Montero hit his 100th career homer in the second inning, ending the longest scoreless streak of DeSclafani’s career and giving the Cubs a 1-0 lead.

The Cubs sent eight batters to the plate for four unearned runs in the fourth, set up by Frazier’s fielding error at third base. Montero singled home a run, and the Reds intentionally walked Chris Coghlan with one out to load the bases and bring up the bottom of the order.

Arrieta struck out on three pitches, but Russell doubled off the base of the wall in right-center field for three runs.

Arrieta retired the first 11 Reds — only two of them got the ball out of the infield — before Frazier homered. The Reds got another run in the fifth on Billy Hamilton’s RBI forceout, but they left the bases loaded when Frazier fouled out and Brandon Phillips hit into a forceout.

“I’m pretty sure nobody in here is happy,” catcher Brayan Pena said. “It’s very tough on all of us.”

Catcher Devin Mesoraco pinch hit in the fifth and drew a walk. He’s been limited to three pinch-hit appearances in the past 12 games because of a sore left hip. He’ll try to catch in the bullpen sometime during the week.

Shortstop Starlin Castro dived to get Brennan Boesch’s short-hop grounder in the hole in the sixth inning. Getting up to his right knee, Castro threw him out at first base.

Cubs: Reliever Pedro Strop retired all three batters in the eighth. He’d been bothered the past few days by a sore toe.

Reds: Slumping right fielder Jay Bruce was out of the lineup even though he was healthy, getting a day to regroup. Bruce pinch hit in the ninth and struck out. He’s batting .161 with a team-high 25 strikeouts.

Wainwright may be lost for season

The Associated Press   Adam Wainwright tried his best to hide the stress of the situation. The St. Louis Cardinals... read more