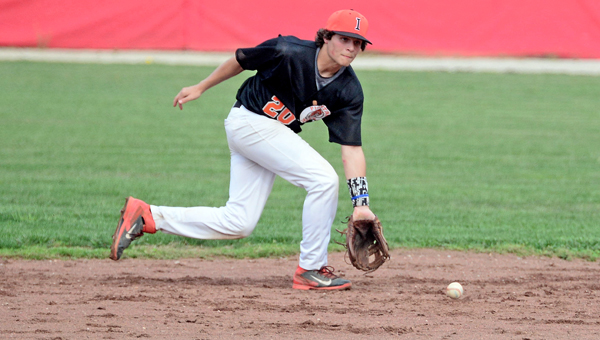 Ironton Fighting Tigers’ shortstop Luke Diamond sets up to throw to first base. Diamond had three hits in a 5-4 win over Coal Grove. (Kent Sanborn of Southern Ohio Sports Photos)

Morris pitched six shutout innings of relief and Luke Diamond led a nine-hit attack as the Fighting Tigers rallied to beat the Coal Grove Hornets 5-4 on Monday in an Ohio Valley Confernce game.

Morris struck out nine, walked four, gave up three hits and one run as Ironton rallied from a 4-1 deficit.

Diamond went 3-for-4 with a double while Garrett Carrico was 2-3 and Dane Wilson and Andy Bruce were 2-4.

“Larry Morris pitched well. He gave us six strong innings of relief,” said Ironton coach Larry Goodwin. “Diamond had a good night at the plate. Wilson, Carrico and Bruce all hit well, too.

Hornets’ coach Dean Mader praised Ironton for playing well, but he was disappointed in his team’s offense.

Both teams came out scoring.

Jacob Clark and Daniel Rutherford singled, the pulled off a double steal and Clark scored on a throwing error.

Jesse Rigsby walked, moved up on a passed ball and Jacob Pierce singled in a run. Sean Paulus walked and Cole Gannon had an RBI single.

Ironton got a run back in the third.

Diamond doubled, Garrett Carrico was hit by a pitch, and Hunter Klaiber hit into a force play at third. But Andy Bruce followed with an RBI single.

The Fighting Tigers tied the game in the fourth.

Tanner Price walked, stole second and went to third on a ground out by Wilson. Diamond then singled to center to score Price.

Ironton took the lead with a run in the fifth.

Bruce singled, Larry Morris walked and Richard Crockrel put down a sacrifice bunt. After a force out at home, Wilson lined a single to score the go-ahead run.

“We settled down and played much better defense after the first inning. We executed parts of our ‘small ball’ better than we have as of late. It was a seven-inning battle against a good Coal Grove team,” said Goodwin.

Pierce went the distance for the Hornets. He struck out nine, walked four and four of the runs were earned.