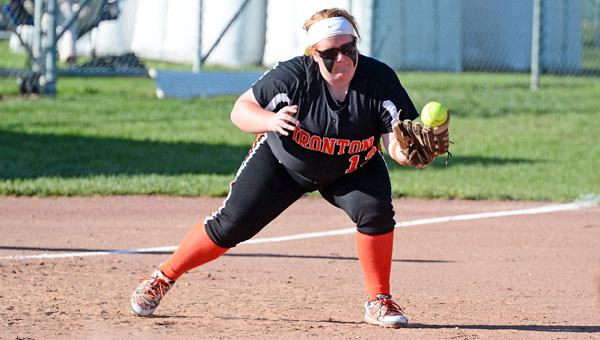 The Ironton Lady Fighting Tigers are a very obedient group.

The Lady Tigers did what their coach said and as a result notched a 5-3 Ohio Valley Conference win over the previously unbeaten Rock Hill Redwomen on Tuesday.

‘I told the girls before the game to stay focused, believe in themselves and their teammates, and give me 100 percent,” said Ironton coach Missy Fields. “They did just that.”

The Lady Tigers had 11 hits with Kenzi Cremeens going 2-for-4 with a double, Aley Carmon and Zjaytia Black-Mize 2-3, and Breanna Klaiber was 2-3 with a double.

“Rock Hill is a very talent team both offensively and defensively. They hit the ball well tonight,” said Fields.

“Taylor Monk had several nice catches in centerfield and Ariel Whitt hustled to make several plays in the infield that would have been base hits. I was impressed with my catcher Kenzie Cremeens made several diving catches including the final out of the game.”

Kylee Metzger got the win. She struck out one and walked three.

Jill Hairston took the loss as she struck out four and did not walk a batter.

Ironton jumped out to a 2-0 lead in the first inning. Cremeens doubled, Monk reached on an error and Klaiber and Carmon had RBI singles.

The lead went to 3-0 in the third when Klaiber doubled and scored as Whitt reached on an error.

Black-Mize, Cremeens and Monk all singled for a run and Klaiber grounded out as a run scored.

Rock Hill wasn’t going to go down without a fight.

The Redwomen got a run in the sixth when Harrah singled and Kingrey doubled.

Rock Hill mounted a rally in the seventh and scored twice.

Russell singled, Jenna Lane walked, they moved up on a ground out and Harrah had a two-run single.

But Metzger got the next batter to foul out to the catcher to end the game.