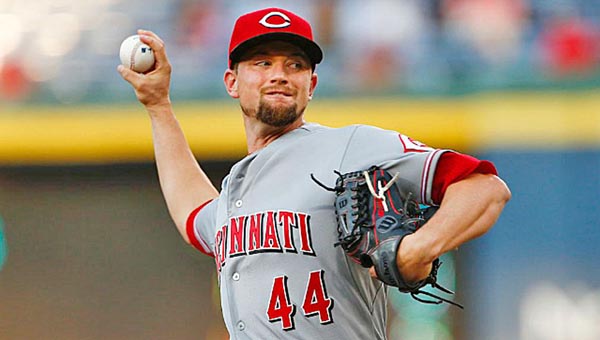 Cincinnati Reds’ pitcher Mike Leake threw eight shutout innings and hit a home run in a 5-1 win over the Atlanta Braves on Thursday. (Photo Courtesy of The Cincinnati Reds)

ATLANTA (AP) — Mike Leake had a five-run lead and was just one scoreless inning from earning his first career shutout.

He and Reds manager Bryan Price agreed, however, that there was no sense risking injury this early in the season.

“Yeah, I was getting a little tight,” Leake said. “I didn’t feel like I should push it.”

Todd Frazier, Tucker Barnhart and Billy Hamilton also had solo homers as the Reds won for the third time in four games. Joey Votto had two hits and drove in a run.

Leake (1-1) allowed just four baserunners, retiring the last 12 batters he faced. The right-hander, who struck out three, threw 62 of 97 pitches for strikes.

But Price saw no reason to push Leake’s arm to an extreme.

“We had that conversation,” Price said. “I love starters staying in the game. I’m a huge fan of it. He was done. If you get a starter that says he’s done, I’m not going to run him back out there. That’s creating problems.”

Cincinnati, which ranks second in the NL with 31 homers, went up 4-0 in the eighth on Frazier’s seventh homer and 5-0 in the ninth on Hamilton’s second.

Leake leads the majors in hits by a pitcher with 70 since he debuted in 2010. Despite his success at the plate, Leake takes more pride in what he does on the mound.

“I’ve got to say the pitching,” he said. “It’s fun not feeling the ball come off your bat, but my job’s to pitch.”

The Braves have dropped three in a row and eight of 10.

It marked the third straight game that the top of the Braves’ rotation struggled. Atlanta’s starters began the night with a 5.11 ERA over their previous 14 games.

Miller began the sixth with Hamilton reaching on a passed ball strikeout. After Zack Cozart singled, Hamilton scored from second on Votto’s RBI single for a 1-0 Reds lead. Barnhart and Leake had back-to-back homers to make it 3-0 in the seventh.

“Made two terrible pitches down the middle,” Miller said. “We were in the ballgame at that point and just gave it away. It’s on me.”

Frazier homered off Donnie Veal, whose contract was purchased from Triple-A Gwinnett earlier in the day. Hamilton homered off Ian Thomas.

Tony Cingrani pitched the ninth for Cincinnati, allowing Freeman’s RBI double before Jonny Gomes popped up to end the game.

Reds: 2B Brandon Phillips was scratched from the lineup 90 minutes before the game with sickness. Skip Schumaker took his place and went 1 for 3. … Manager Bryan Price said C Devin Mesoraco (hip) was still getting treatment but was available to pinch-hit. Price said the team won’t know a longtime plan for RHP Homer Bailey (elbow), on the 60-day disabled, for another day or two.

Braves: Johnson left the game before the bottom of the fifth with a fractured left hand. He will be placed on the 15-day disabled list on Friday.

Reds: Anthony DeSclafani (2-1) will make his fifth start of the season and career-first against Atlanta. DeSclafani leads NL rookies in wins, strikeouts and innings pitched.

Braves: RHP Mike Foltynewicz, a top prospect acquired in January in the deal that sent Evan Gattis to Houston, is expected to get called up from Triple-A Gwinnett and make his Atlanta debut. RHP Trevor Cahill is still listed as Friday’s starter, but he pitched two innings of relief Wednesday and is 0-3 with a 9.42 ERA.

CINCINNATI (AP) — The Bengals felt they were in position to take a player in the first round who may... read more