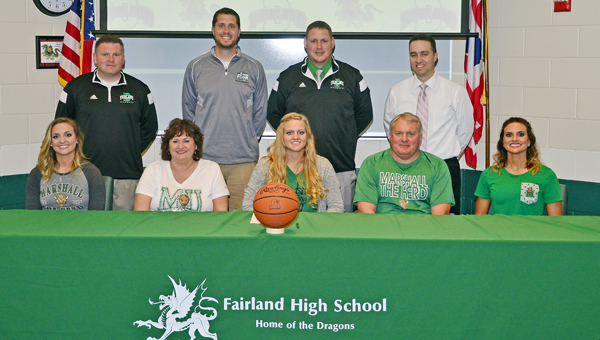 The Fairland Lady Dragons’ senior basketball standout kept searching for the right fit. After sifting through numerous schools and offers, she decided on Marshall University.

“I never looked at what division it was. I looked at what the fit would be for me. I think I’ll fit in really well just because I’ve played with so many of those girls in AAU. A lot of them are friends,” said Riley who will be united with signee Maddie Morris from Spring Valley.

Urbana made Riley and offer and she considered it, but they did not have the nursing program she wanted.

“I have to worry about my education,” said Riley.

She visited Pfeiffer University and talked to Marietta, and when the Lady Dragons went to the state tournament the team practiced at Ohio Dominican and the head coach expressed interest.

“(The coach) wanted to come watch me play, but I had already decided on Marshall before anything could really develop,” said Riley.

“I have a good relationship with the coach from Marietta. I liked her program but I just couldn’t see myself away from home, so that was the determining factor. I had a lot of good D-2 looks, but I was just really drawn to home.”

Riley is 5-foot-9 which will make her a perimeter player instead of playing both inside and out in high school.

“I’m not a point guard. I can shoot but I’m not a shooting guard. I’m more of drive, play defense, a role player. Do your role and do it well,” said Riley.

Fairland coach Jon Buchanan said Marshall coach Matt Daniel is getting a versatile player who will develop her game to fit the college level.

“Height-wise she’s probably a guard and she played a lot of guard for us this season. She’s a strong guard, too. I think he’s just feels he’s getting a player.”

Buchanan said Riley had impact on the program from the first time she stepped foot on the court. Riley has helped the Lady Dragons win 90 games during her four years and reach the state tournament the past two seasons.

“She’s been as important as anybody we’ve ever had. We had 90 wins in four years. That would go down with any class in Ohio, let alone at Fairland. She’s a do-it-all player. She doesn’t have any holes in her game,” said Buchanan.

Riley said playing in the state tournament has been the highlight of her career.

“It was awesome. I would do it all over again. Being with the people I was with, it was amazing. And the coaches did everything for us. And it wasn’t just basketball. They taught us so much more than how to play the game,” said Riley.

Kelsey is the daughter of Barbara Riley and Scott Riley.

Jim Walker jim.walker@irontontribune.com   The NFL draft has moved to Chicago. But the change of scenery hasn’t changed the talent... read more